In Burkina Faso, a School for Husbands

Update Required To play the media you will need to either update your browser to a recent version or update your Flash plugin.
By Mario Ritter Jr.
14 January 2022


In the West African nation of Burkina Faso, wives are often blamed when marriages run into trouble. The World Bank is supporting a project to teach men how to be better husbands by taking them to school.

The program was organized by the Sahel Women's Empowerment and Demographic Dividend, or SWEDD.

Yeli Ouigo attended one of the "husband schools" to help him become a better spouse to Kwama Zoupoka, his wife.

"Before taking part in the classes, life as a couple wasn't easy," Ouigo said. 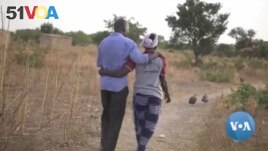 Could Burkina Faso's Husband Schools Be Key to Successful Marriages?

He said that there was a time when he did not think that women and men had much in common when it came to problems with family life. After the classes, however, he understood that married couples can help each other.

The schools use many teaching techniques. They include role play, to help the men understand the needs of their wives and how to meet them — for example, helping with housework.

They also teach the men about women's rights, family planning, health and hygiene. In addition, men are encouraged to include women in making family decisions.

Nabalou Bibata of the Association for the Promotion of Women and Children organized the project. She said the classes have made a big difference to women in the community. Some men have even attended the childbirth of their wives, she said. Bibata said this is a part of taking responsibility for the care of the children by the fathers.

The program helps the men of the village who are not able to take part in the husband schools, Bibata said. That is because the men who did attend have become role models.

Although these are the first schools of their kind in Burkina Faso, similar projects have been brought to countries like South Africa and Niger.

Edward Wageni is world wide head for the United Nations Women HeForShe Initiative. He said the husband schools can help reduce incidents of violence in the home.

He said it helps men understand that women's rights are not just about women and girls.

"Gender equality is about everybody," he said.

Wageni said the husband schools also could be be helpful in countries outside Africa, places where gender equality is better than in Burkina Faso.

"So, this is a good idea that can be replicated and even scaled up in other parts of the world, including those countries that feel they have made a lot of gains," he said.

Zoupoka, meanwhile, said the classes have made her husband much more helpful and considerate.

And the love between her and her husband is growing, she said, adding that her husband now even brings her little gifts from the market.

The national coordinator of the husband schools called the project a great success, and said it will be expanded to other parts of the country. The second part of the project is due to start later this year.

spouse –n. someone who is married; a husband or wife

technique –n. a way of doing something by using special knowledge or skill

role –n. the part someone plays in an activity

hygiene –n. the things that you do to keep yourself and your surroundings clean in order to maintain good health

encourage –v. to make someone more likely to do something

replicate –v. to repeat or copy something exactly