In Chile, Searching for Alien Life in the Sky

Update Required To play the media you will need to either update your browser to a recent version or update your Flash plugin.
By Dan Novak
06 November 2021


With its clear sky and dry air, Chile's Atacama desert is a place where astronomers look up at the night skies for life on other planets. They also study dark energy, a mysterious force thought to be driving the growth of the universe.

Soon, they will have a new Giant Magellan Telescope (GMT) to search into distant worlds beyond Earth. The GMT is a $1.8 billion center being built at the Las Campanas observatory. The telescope will be able to see 10 times clearer than the well-known Hubble space telescope.

The GMT is expected to begin operating by 2030. It will compete with the nearby European Southern Observatory's Extremely Large Telescope as well as the Thirty Meter Telescope being built in Hawaii. 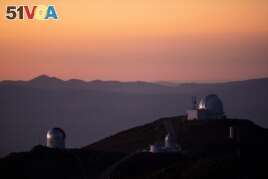 A general view during the sunset in 'Las Campanas' Observatory, located in the Andes Mountains, in the Atacama Desert area, near Vallenar, Chile, October 14, 2021. Picture taken October 14, 2021. REUTERS/Pablo Sanhueza

Leopoldo Infante is the head of the Las Campanas observatory. He said the new generation of giant telescopes is being developed to search for life on other planets and look for the origin of dark energy. "It's a race by these three groups for who makes it first and who makes the first discovery," he said.

Infante said the new large telescope would be able to find molecules in the atmosphere of faraway planets. "And whoever detects life on another planet will win the Nobel Prize, I assure you."

The other prize is studying dark energy which makes up most of the universe. Infante said dark energy is causing the universe to expand but scientists do not understand its origin.

Infante said the GMT will help astronomers study and understand "what that energy is and where that energy comes from."

Reuters reported this story. Dan Novak adapted it for VOA Learning English. Hai Do was the editor.

detect — v. to discover or notice the presence of (something that is hidden or hard to see, hear, taste, etc.)

origin — n. the point or place where something begins or is created : the source or cause of something

assure — v. to make something certain