Update Required To play the media you will need to either update your browser to a recent version or update your Flash plugin.
By Bryan Lynn
16 December 2020


In China, a large number of people take the sport of pigeon racing very seriously. Many competitors spend big money to get their hands on top-performing birds.

One such competitor is 57-year-old Yu Yuguang. He says he gets so excited waiting for his pigeons to arrive at the end of a race that his heart starts beating fast. 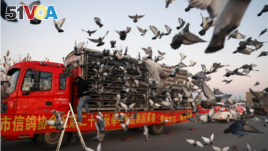 Racing pigeons are released from cages on the back of a truck for a 1000-kilometer race in Langfang, Hebei province, China, on November 20, 2020. (REUTERS/Carlos Garcia Rawlins)

"Those are the most intense and enjoyable moments of a pigeon race," Yu told Reuters news agency. He said the sport is like playing the lottery. And so far, he has been lucky.

Recently, his 7-month-old pigeon named "Little Ancestor" placed first in a Chinese Racing Pigeon Association race. The bird beat more than 4,800 other competitors. Little Ancestor completed a trip of about 1,000 kilometers in a record time of 16 hours, 24 minutes and 54 seconds. The race started in Langfang, near the Chinese capital Beijing, and ended in Shanghai.

Pigeon racing has a long history in China. It began as a sport enjoyed mainly by very rich people. But the country's economic development over the years has permitted the sport to spread beyond the wealthy. Membership in the Chinese Pigeon Association has jumped from tens of thousands in the 1980s to about 400,000 today, says the group's vice president, Huang Jian.

Those numbers are impressive. Belgium, the traditional heartland of the sport, has about 20,000 pigeon racers.

While China's numbers remain high, most of the big money being put into the sport comes from wealthy individuals. These leaders in the sport are willing to pay huge amounts to get the most sought-after pigeon bloodlines.

Last month, a Chinese collector made news by paying $1.9 million for a racing pigeon at a public sale in Belgium. The sale was the latest in a series of high offers made by Chinese pigeon owners. Such moves have driven prices up.

Some Chinese breeders are also willing to bid heavily on their own birds at public sales to increase their market value. One Hangzhou-based breeder, who gave his name as Ying, traveled to Beijing last month for an auction. There, he bought back six of his own pigeons, all of which had placed high in races.

Ying says he bought the birds at prices ranging from $2,300 to $7,600. He says he did not think twice about spending the money. "I'm so in love with pigeons. I love them so much. In my heart, pigeons come first and my wife and children second," he said.

lottery – n. a game in which people buy tickets with numbers and if the numbers are chosen the person wins a prize

bloodline – n. all members of a family group of people or animals

bid – v. to offer a particular amount of money for something that is for sale