Update Required To play the media you will need to either update your browser to a recent version or update your Flash plugin.
By John Russell
30 August 2022


The lands in Bordeaux, France's famous wine area, in some ways look the same as ever. Healthy, colorful grapes hang on large numbers of green vines.

But this year something is different in one of the world's most famous wine producing areas. The harvest that once started in the middle of September is now happening earlier — in the middle of August.

The early harvest is a result of drought and the wine industry's attempts to deal with the effects of climate change. 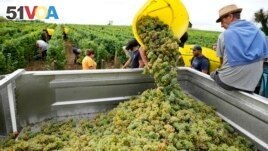 Observers say this year's season of heat and fires has produced high quality grapes although yields are lower. But getting such a harvest required wine growers to make creative changes in growing methods. They cut vines in a different way and sometimes watered vines in places where irrigation is usually banned.

Producers across Europe who have seen the effects of global warming are worried about what is to come.

He said, so far, "global warming is very positive." But he warned, "...if you increase the temperature by one degree more... you will lose the freshness part in the balance of the wine."

Grape growers changed their techniques during a series of heat waves that hit most of Europe. In the Bordeaux region, in southwestern France, fires destroyed large areas of forest. It did not rain from the end of June until mid-August.

Eric Perrin is one of the owners of the Chateau Carbonnieux, another wine producer. Perrin said that during his childhood, in the 1970s, harvests started around mid-September. This year, they began on August 16.

But the 2022 wines may be better than ever, Perrin said, because the grapes are healthy and well balanced. The hot, dry weather also prevented vines from getting diseases like mildew.

Producing wine is an ancient tradition at Chateau Carbonnieux. It is said that Thomas Jefferson visited the vineyards in 1787 before becoming president of the United States. Jefferson brought a pecan tree that still stands in a park.

Chateau Carbonnieux wine is sometimes offered by President Emmanuel Macron as a gift.

The drought also changed the way wine producers work. Before, wine growers used to give vines a shape that gave grapes the most sun. More sunlight causes the grapes to produce more sugar, which can be turned into alcohol. This year, growers often let leaves cover the grapes to save the fruit's acidity and freshness, Teitgen explained.

Yields may be 15 to 20 percent lower in the region, mostly because of smaller grapes and the fact that some were burned by the sun, Teitgen said. He added that the differences will not affect the wine's quality.

This year, producers had permission to water adult vines, an act that is usually banned in Bordeaux.

Vines that are several years old have deep roots that let them reach water far underground and withstand drought. But, "Some plots were heavily suffering with leaves falling," said Manon Lecouffe, a worker in the Chateau Smith-Haut-Lafitte vineyard.

Another step wine makers may take is to reduce the density of their fields to require less water or to work the soil to save water.

Experts are also considering whether planting new kinds of grapes could be helpful.

"We need to reprogram our own way of thinking," he said. "There are many tools that are still within our reach, which are already used in warmer regions."

Sylvie Corbet reported on this story for the Associated Press. John Russell adapted it for VOA Learning English.

grape – n. a green, dark red, or purplish-black berry that is used to make wine or is eaten as a fruit

vine –n. a very long, thin plant that grows along the ground or up and around other plants or structures

drought —n. a long period of time during which there is very little or no rain

yield – n. the amount of something that is produced by a plant, farm

irrigation – n. the act of supplying (something, such as land) with water by using artificial means (such as pipes)

region – n. a part of a country, of the world, that is different or separate from other parts in some way

plot – n. an area of land that has been measured and is considered as a unit; a usually small piece of land that is used for a particular purpose