Update Required To play the media you will need to either update your browser to a recent version or update your Flash plugin.
By Anna Matteo
19 November 2020


On the roof of an apartment building in one of Gaza's most crowded cities live some unusual occupants – two baby lions.

The babies, or cubs, walk among the water tanks and eat chicken for food. Children play with the animals and some take selfies with them. 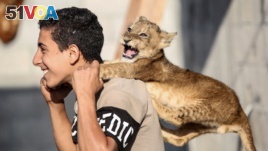 A Palestinian youth plays with one lion cub at his family house in Khan Yunis in the southern Gaza Strip on November 9, 2020.

One is male, the other female. The lion cubs have become pets for a 27-year-old bakery owner Naseem Abu Jamea. They have become popular playthings for many people in the neighborhood.

And this has animal welfare experts concerned.

However, as children in his family and from the neighborhood played with the animals, Abu Jamea dismissed the risks.

"When you raise them as babies, he said, "a harmony will grow between both of you." This harmony, he added, would keep the lions from hurting him and others.

Abu Jamea said he got the cubs from a local zoo but would not give more details. He did, however, share a dream of his.

"It is my hobby. I was attached to them and I love to have them," he told Reuters. He said he hopes one day to have his own zoo.

One animal doctor, Amir Khalil, has a different opinion. He has led several trips to Gaza with the animal welfare organization Four Paws to rescue mistreated zoo animals. Khalil said he was concerned to hear about the cubs.

"I advise the Gaza authorities to take away those lions," he told Reuters by phone from Pakistan. "At the age of six months a lion becomes more dangerous as his size gets bigger and his muscles become stronger."

Khalil also fears for the cubs' own welfare. The doctor said lions raised in a home may not get the food and medical care they need. This could result in long-term health problems, especially difficulties with muscles, joints, and bones.

During the coronavirus pandemic, zoos in Gaza have experienced a drop in the number of visitors. Without paying visitors, they are struggling to feed and care for the animals.

"Palestine law does not permit raising wild animals in people's homes," he told Reuters. "Wild animals must be kept in proper zoo houses."

Back at the apartment building, the neighbors seemed untroubled to be living so close to a wild animal.

"I am not afraid," said one neighbor. "On the contrary, we are proud that we have lions in our area."

Nidal al-Mughrabi reported this story for Reuters from Gaza. In Jerusalem, also for Reuters, Stephen Farrell wrote it. Anna Matteo adapted it for VOA Learning English. Bryan Lynn was the editor.

roof – n. the upper covering part of a building

welfare – n. the state of being or doing well especially in relation to happiness, well-being, or success

hobby – n. an interest or activity engaged in for pleasure

contrary – n. just the opposite

proud – adj. very happy and pleased because of something you have done, something you own, someone you know or are related to, etc. : feeling pride