In India, More People Are Buying and Selling Gold Electronically

Update Required To play the media you will need to either update your browser to a recent version or update your Flash plugin.
By Susan Shand
01 April, 2018

The buying and selling of gold has traditionally been done face-to-face. But now smartphones, e-wallets and some investment programs are bringing new buyers into the business.

Digital payment systems have grown in popularity in India since the government stopped producing large-value bank notes in 2016. 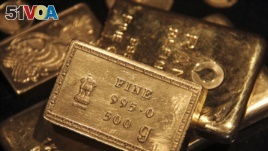 FILE - Gold bars are displayed at a gold jewelry shop in the northern Indian city of Chandigarh.

Online gold purchases have been growing worldwide for years. But they are a new idea in India, where jewelry and pieces of gold are often kept by individuals or given as gifts.

It is difficult to estimate how many buyers are entering the market because of software apps or the internet. One digital payments company reported that in the first six months after it began offering digital gold last April, it processed about $18.4 million worth of sales. That represents a small part of the Indian gold market.

With most purchases made in the traditional way, demand for physical gold is not slowing.

Indian buyers are also interested in competitive pricing and the ability to purchase gold in small amounts.

Gold-based offerings, such as Gold Accumulation Plans, let users buy and store gold in amounts as small as 0.1 grams. Many young people like these plans, along with other online investment programs.

In the past, everyone who wanted gold had to wait until they had saved a large amount of money to make a purchase. Joe Jacob, a 29-year-old businessman, recently bought 5 rupees worth of digital gold as a "trial investment." He said that buying digital gold is easier and safer than having gold physically in his home.

Security experts said that because the gold is guaranteed to physically exist in a secured place, there was little risk of dishonest sellers.

A company called Paytm is at the top of the crowded e-wallet business in India. It announced two new gold gift and savings plans this month.

Gold purchases traditionally increase around the time when many marriage ceremonies are performed, experts say.

Nitin Misra, senior vice president at Paytm, confirmed the rise. He confirmed that "about 40 percent of sales" happen during the "off-season" for buying gold in India.

He said more than half of the company's users were repeat buyers, and 70 percent were younger than 35.

The company said last year it planned to sell $200 million worth of gold during the 12-month period ending on April 1, 2018. But its reported sales appeared to fall short of that number.

Bangalore-based businessman P Vinoth says he likes to buy jewelry and other gold-covered objects from stores. He says e-wallets now offer another way to make purchases.

He used to invest in exchange-traded financial programs, he said, but "now I am using Paytm gold."

smartphone - n. a wireless device that can make telephone calls, send and receive email, and perform searches on the internet

application – n. a computer program for a smartphone

vault - n. a secure place where money or valuable things are kept

accumulation - n. to collect or gather (something) as time passes