Update Required To play the media you will need to either update your browser to a recent version or update your Flash plugin.
By Ashley Thompson
08 July 2022


Sarfaraz Javaid lives in Kashmir. The Muslim-majority area is in the Himalaya Mountains. The area has been divided between India and Pakistan since 1947. People living there have faced many years of conflict, military presence and crackdowns.

Javaid is among a group of artists in Kashmir who are forming a new musical tradition. They call it "conscious music."

The music mixes Sufi rock with hip-hop music. Sufism is a form of Muslim belief.

Javaid moves his body to the sound of the guitar. His voice rings out through the forest: "What kind of soot has shrouded the sky? It has turned my world dark...Why has the home been entrusted to strangers?" 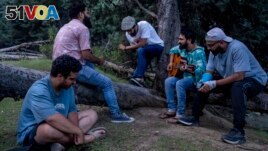 Javaid is a poet like his father and grandfather. His song is called "Khuaftan Baange" – Kashmiri for "the call to night's prayer."

"I just express myself and scream, but when harmony is added, it becomes a song," said Javaid.

The new music often includes religion indirectly. The hidden religious ideas are meant to get around measures that restrict speech in Indian-controlled Kashmir. The restrictions have led many poets and singers to limit what they wish to say.

The music also seeks to bridge tensions between Muslim tradition and the modern world in an area where many people are conservative.

Kashmir has a tradition of spoken poetry that is hundreds of years old. It is heavily influenced by Islam. After a rebellion against Indian rule broke out in 1989, poetic descriptions of freedom were heard from the loudspeakers at Muslim religious centers. Poems based on historical Islamic events were sung at the burials of fallen rebels.

Twenty years of fighting left tens of thousands of civilians, rebels and government forces dead before the armed struggle eased. Unarmed mass demonstrations took place in 2008 and 2010. Around that time, Kashmir also saw the rise of protest music in English-language hip-hop and rap. It was a new kind of resistance music.

Kash's songs got dangerously close to sedition – the crime of saying, writing or doing something that urges people to disobey their government. It is illegal to question India's territorial claims to the area.

Police questioning pushed Kash to a point where he almost stopped making music.

Tensions rose in the area in 2016 when Indian troops put down another massive public uprising, leading to a renewed militancy. Three years later, in 2019, India canceled the area's partial self-rule. It also put in place severe restrictions on communications, including the press and other forms of free expression.

The crackdown that began in 2019 has continued. But many artists continue playing the music that made them famous. Many of their songs are widely shared on social media. "Conscious music" has grown further as artists more recently began including Urdu and Kashmiri song words called lyrics.

A group of young artists gathered recently with musician Zeeshan Nabi in Srinagar, Kashmir's main city. They debated the hidden meanings and religious imagery in their work.

Arif Farooq is a hip-hop artist who performs under the name of Qafilah. Religious symbolism, Qafilah said, is a creative device that represents Kashmir's pain and avoids punishment from the government.

"You want to steal, but you don't want to be caught," Qafilah said.

On a recent night, the artist behind the song "Khuaftan Baange," sat at the edge of Srinagar's Dal Lake. He sang a song for his homeland.

The sun dropped behind the mountains and a light rain began to fall. He ended his song by saying the names of disappeared people. A distant family member was among the names.

Sheikh Saaliq and Aijaz Hussain reported this story for the Associated Press. Ashley Thompson adapted it for VOA Learning English.

conscious –adj. able to understand what is going on around you; awake

soot –n. a black material that results from burning something

poet –n. a person who writes poems, an artistic form of writing

harmony –n. a combination of different musical notes played at the same time that produces a pleasing sound

sovereignty –n. a country's independent power and right to govern itself

reflect –v. to show the image of something