In Mexico, Children as Young as 10 Recruited by Drug Cartels

Update Required To play the media you will need to either update your browser to a recent version or update your Flash plugin.
By Gregory Stachel
20 October 2021


A Mexican nonprofit, Reinserta, released a report last Wednesday about children in cartels. They talked with 89 imprisoned minors across Mexico. Reinserta works to prevent children from becoming recruited by drug cartels. They also find ways to rebuild the lives of those who have already been recruited.

Of the 89 minors, 67 of them said they had been actively involved with cartels. They joined at an average age of between 13 and 15. All of them had left school and, at some point, began using firearms.

Drug cartels find people under 18 useful. They get less attention and cannot be charged as adults. At first, they are used for street-level drug sales and as lookouts. But often, they quickly move up to become killers.

Mexican laws permit sentences of between three and five years for most young criminals. This means almost all of them leave prison before they are 21.

Marina Flores is a researcher for Reinserta. She said the study suggests that some common ideas about children in drug cartels are not true.

Children who join cartels almost always use drugs and leave, or are forced to leave school before they join.

However, membership in a local street gang no longer appears to be the pathway to joining a cartel. Cartels in Mexico are now recruiting children as soon as they leave school.

Flores said, "street gangs are not a previous step for them joining organized crime." She continued, "we are finding out that as soon as they are taken out of school, they immediately go into organized crime." 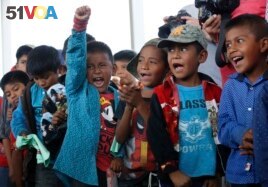 Reinserta says children are often recruited by other children. Drug use is one way to recruit them. Cartels also use religious beliefs and a sense of belonging these children cannot find in other places. Combinations of poverty, abusive homes and unresponsive schools and social agencies are also causes.

Reinserta says there are many ways to prevent children from joining cartels, including increased early attention to children, more activities, more chances to learn and working to prevent violence at home. The group also proposes creating a national list of children recruited by cartels, increased attention to mental health and early and effective treatment of addiction.

Jacobo carried out a murder for a cartel when he was 12. He told his story to Reinserta. His full name was not given due to his age and fear of the gangs.

He said, "They go around looking for kids who are out on the streets and need money. At 12 years old, I became sort of a hired killer."

"A neighbor asked me, ‘Do you want to earn money?'" Jacobo explained.

His family needed the money. But the $1,500 he earned did not last long. He started using drugs, in part to quiet his mind from what he was doing.

From the age of 14, he was torturing and killing members of enemy cartels.

Then, the cartel ordered him to murder someone publicly. He refused and went into hiding. The cartel asked to meet him.

"When I showed up to the meeting place, they started shooting me," Jacobo said. He was left for dead. Luckily, he survived and is now serving a four-year sentence for murder as a child.

Mark Stevenson reported this story for The Associated Press. Gregory Stachel adapted it for VOA Learning English. Susan Shand was the editor.

cartel – n. a group of businesses that agree to fix prices so they all will make more money

recruit – v. to find suitable people and get them to join a company, an organization, or the armed forces

get rid of – phr. v. to do something so that you no longer have or are affected or bothered by (something or someone that is unwanted)