Update Required To play the media you will need to either update your browser to a recent version or update your Flash plugin.
By Susan Shand
26 March 2021


In the forests of southeastern Myanmar, aid workers say the army was shooting and arresting people long before last month's military overthrow.

These largely unseen activities continue. In the country's rural southeast, the army has forced as many as 8,000 ethnic Karen people to flee their homes. International aid groups say it is the worst problem there in nearly 10 years.

The Karen are now living in the jungle. Many are worried about their health and security. There does not appear to be a way for them to return to their villages. 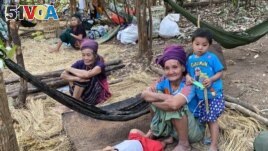 In this photo released by the Free Burma Rangers, ethnic Karen women sit with family members in the jungles of northern Karen State where they are sheltering from an ongoing local offensive by the Myanmar army, on Jan. 27. (Free Burma Rangers via AP)

The crisis in this area has been forgotten since the government campaign against those protesting the overthrow that removed the government of Aung San Suu Kyi.

The crisis is a reminder of the force Myanmar's army has long used against civilians, especially the country's ethnic minorities.

The Karen National Union (KNU) is the leading political organization for the Karen people. It works to meet the needs of the displaced by providing food, security and housing.

But Padoh Saw Taw Nee said they cannot do it forever. He is the head of the KNU's international department. He answered questions from reporters by email. "The international community should reach out with humanitarian assistance to these people who are in need as soon as possible," he said.

The Karen are among more than 12 ethnic groups in Myanmar that have been asking for greater independence from the central government. Myanmar, earlier known as Burma, became independent from Britain in 1948.

At times, some of the ethnic groups have had armed conflict with the government; in recent years, many have reached an uneasy ceasefire. They were in talks with Suu Kyi's government, but failed to reach an agreement before she was removed by the army.

The army has aggressively expanded its influence in at least two parts of Karen state since 2017. It has built new bases and roads to control the area. Aid organizations there say army activity and the number of soldiers have increased recently.

The Karen have their own armed force, the Karen National Liberation Army. It has fought against the government, causing government troops to bomb local villages.

Aid agencies say the 8,000 people who fled to the jungle are safe. They are trying to build shelters and open schools.

The Free Burma Rangers is a humanitarian group that has been bringing in aid since the attacks began. Its founder and director, Dave Eubank, is a former member of U.S. Special Forces. He organizes medical aid and food for villagers. He spoke to the Associated Press (AP) by telephone.

He said that stopping attacks by Myanmar's troops provides "security and survival." They are most important. But the Karen also need food, medical aid and shelter, he added.

Burma expert David Mathieson told the AP that the Karen have always understood that the army is a threat.

"When you live in these areas of ongoing armed conflict you know exactly who you are dealing with and you know that you can't trust them," he said.

"This is the military trying to subjugate the entire country once again," he added.

jungle – n. a thick forest in areas near the Equator of the Earth

subjugate – v. to defeat and gain control of someone or something through the use of force