Update Required To play the media you will need to either update your browser to a recent version or update your Flash plugin.
By Alice Bryant
21 February 2021


In the U.S. state of Nevada, a cryptocurrency businessman hopes to turn dreams of a futuristic "smart city" into reality.

To do that, he is asking the state to let companies like his form local governments on land that they own. This would give them power over everything from schools to law enforcement.

Jeffrey Berns is head of Nevada-based Blockchains LLC. His "smart city" would permit people to buy goods and services with digital money. But it would also record all of a person's blockchain activities, including financial statements, medical history and other private information. 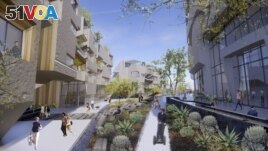 Blockchain is a digital record-keeper known mostly for recording cryptocurrency usage. But it has also been used by some local governments for everything from recording marriage documents to aiding elections.

Blockchains LLC wants to begin its process by 2022 in rural Storey County. It is proposing to build 15,000 homes and 3 million square meters of business and industrial space within 75 years.

Berns' idea is the basis for a bill that will be considered by state lawmakers. He said traditional government does not offer enough ways for community members to invent new uses for blockchain technology.

"There's got to be a place somewhere on this planet where people are willing to just start [over] and say, ‘We're not going to do things this way just because it's the way we've done it,'" Berns told The Associated Press.

He wants Nevada to change its laws to permit "innovation zones" – areas where companies would have powers like those of a local government. That includes the creation of court systems, along with enforcing taxes and building infrastructure. It also means companies would make decisions about land and water usage.

The proposal has been met with interest but skepticism from Nevada lawmakers. However, the bill has yet to be officially presented and discussed in public hearings. Most lawmakers in the Democratic-controlled Legislature want to expand Nevada's economy, which depends mainly on vacationers. But many fear strong public opposition to business incentives as they struggle to pay for healthcare and education.

The bill differs from the incentives the state has been careful about approving, such as the $1.3 billion tax break given to electric carmaker Tesla. The company built a battery factory in Nevada.

But the proposal raises deeper issues about the increasing influence technology companies have on the everyday lives of citizens. Government regulators and members of Congress have accused major technology companies like Google and Facebook of unfairly controlling markets and endangering people's privacy.

Blockchains LLC and "innovation zones" were a central part of Nevada Governor Steve Sisolak's January State of the State speech. In it, he talked about plans to rebuild a more wide-ranging economy after the coronavirus pandemic.

Sisolak's campaign and related political action committee received a total of $60,000 from Blockchains LLC. Sisolak said the proposal would make Nevada the center of this new industry and "create the high-paying jobs" and income to go with it.

State Senator Ben Kieckhefer is a Republican who supported blockchain-related legislation in 2017 and 2019. But he has a somewhat different take on the issue than Sisolak.

He told The Associated Press, "I don't know enough yet to say whether I'm comfortable with this as the next step or not. But, look, it's a big idea and Nevada has been built on big ideas, so let's hear it out."

If lawmakers support the bill, tech companies with 200 square kilometers that promise a $1 billion investment could make areas governed by three people. The current bill states that two of those people would, at first, be from the company itself.

In Storey County, which is home to Tesla's factory, officials are waiting for more information before giving their opinions. But they say there are questions that still need to be answered.

Lance Gilman is a Storey County official. He bought most of the county's land to turn it into an industrial park several years ago. He has supported bringing technology companies to the area and growing its population. Gilman, who did marketing for Blockchains LLC from 2018 to 2019, said there are many unknowns about giving control to a new town within a county.

Gilman told The Associated Press that if the proposed "smart city" does not do well, it is not clear who would be responsible for all the building that took place.

Berns said he understands that elected leaders in Storey County may not want an experimental city in their area. But he thinks the decision should be made by the state – not the county.

cryptocurrency – n. a digital currency that is designed to work as a medium of exchange

skepticism – n. an attitude of doubting the truth of something (such as a claim or statement)

battery – n. a device that is placed inside a machine (such as a clock, toy or car) to supply it with electricity