Scientists Study to Remove Carbon from the Atmosphere

Update Required To play the media you will need to either update your browser to a recent version or update your Flash plugin.
By Anne Ball
23 April, 2017


Scientists have traveled to the mountains of Oman to find a way to remove carbon dioxide gas from the atmosphere.

The geologists hope to find an effective and low-cost way to capture the gas which is blamed for worldwide climate change.

The Middle Eastern country of Oman is one of the few places in the world where the Earth's mantle is easy to reach. This part of the Arabian Peninsula is where an unusual rock formation pulls carbon out of the air.

Geologists are taking rock samples from the al-Hajjar Mountains. They want to discover how a natural process changed carbon dioxide into minerals such as limestone and marble millions of years ago. 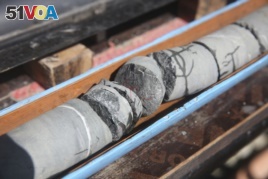 This March 1, 2017 photo, shows sections of a rock core extracted during a geological research project in the al-Hajjar mountains of Oman.

Peter Kelemen is a geochemist at Columbia University's Lamont-Doherty Earth Observatory. He has been exploring Oman's hills for almost 30 years.

"You can walk down these beautiful canyons and basically descend 20 kilometers into the earth's interior," he said.

This area in Oman has the largest exposed parts of the Earth's mantle, a part of the Earth that is usually far below the surface. It was brought to the surface by the forces of plate tectonics millions of years ago.

The mantle contains rocks called peridotite. The rocks react with carbon in the air and water to form marble and limestone.

Kelemen explained that magnesium atoms combined with carbon dioxide to form limestone, quartz and magnesium carbonate. He said one of the mountains nearby holds "about a billion tons of CO2," or carbon dioxide.

In Oman's mountain caves, rain and ground water form pools. The rain and water pull carbon from the exposed mantle to make mineral formations called stalactites and stalagmites. The surface of these natural pools of water develops a layer of white carbonate—a kind of mineral that contains carbon.

Keleman said if you take off this thin white film, it will grow back in a day. He says that is very fast for a geological process.

Kelemen and a team of 40 scientists have formed the Oman Drilling Project to study how the process works. They want to find out how the rocks managed to capture so much carbon over time. They want to know if the process could be used to clean carbon from the earth's atmosphere.

Keleman's team recently spent four months in Oman collecting many rock samples. They hope to use these samples to develop a geological history of the process that turns carbon dioxide into carbonate.

The team plans to send 13 tons of samples from four different areas to a research ship off the coast of Japan. Kelemen and other geologists will study the rocks there.

They want to find out how the rocks captured so much carbon over 90 million years. And they want to know if there is a way to make that process happen faster.

Kelemen thinks a drilling operation be used to move carbon-rich water into the new seabed on underwater mountains. The submerged rock would chemically take in carbon from the water. The water could then move back to the surface to absorb more carbon from the atmosphere. Then the process would repeat itself.

The scientists hope their research will provide a way of dealing with carbon dioxide and other carbon-based greenhouse gases linked to climate change.

Climate change is a global change in weather patterns. Scientists say it is caused by an increase in levels of carbon dioxide and other gases that trap heat in the atmosphere. The use of fossil fuels is considered a major source of carbon dioxide. 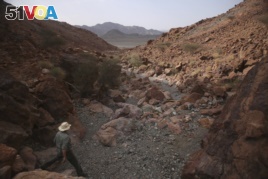 In this March 6, 2017 photo, Peter Kelemen, 61, Oman Drilling Project lead, walks down a valley through a rare exposure of the Earth's mantle, in the al-Hajjar Mountains of Oman.

Until now, most efforts to combat climate change have centered on reducing emissions from cars and power plants. But researchers are testing ways to remove or recycle carbon already in the seas and sky.

In Iceland, they inject carbon into volcanic rock at the Hellisheidi geothermal plant. In China, carbon is filtered and reused at the Sinopec fertilizer plant.

"Any one technique is not guaranteed to succeed," said Stuart Haszeldine. He is a geology professor at the University of Edinburgh. He also serves on a U.N. climate group that studies how to reduce atmospheric carbon.

Keleman said the Oman Drilling Project would need more years of testing. He hopes the energy industry will take an interest and help the project. So far, it has only received support from science organizations including the U.S. space agency NASA.

Anne Ball adapted this story for Learning English based on the Associated Press reports. Hai Do was the editor.

How do you think climate change can be fixed? We want to hear from you. Write to us in the Comments Section or on 51VOA.COM.

geologist –n. a science that studies rocks, layers of soil, etc., in order to learn about the history of the Earth and its life

mantle –n. the middle layer of the Earth that is between the top crust and the inner core

plate tectonics –n. a theory explaining the structure of the earth's crust and many associated phenomena as resulting from the interaction of rigid plates that move slowly over the underlying mantle.

fossil fuel –n. a fuel (such as coal, oil, or natural gas) that is formed in the earth from dead plants or animals

greenhouse gas –n. a gas that contributes to the greenhouse effect by absorbing infrared radiation, e.g., carbon dioxide and chlorofluorocarbons.

patterns - n. a repeated form or design especially that is used to decorate something