Update Required To play the media you will need to either update your browser to a recent version or update your Flash plugin.
By Jonathan Evans
12 December, 2018


American Roy Funch has lived and worked in northeastern Brazil for many years.

Around his home are large mounds of dirt in the shape of a volcano. Funch often wondered what built them, how many there were and how long they had been there.

But a chance meeting with Stephen Martin, an expert on social insects, led to some interesting discoveries: Northeastern Brazil has over 200 million mounds of dirt, and they cover about 230,000 square kilometers -- an area about the size of Britain.

Some of the dirt mounds are almost 4,000 years old. Who or what made these small hills? Insects – termites, to be exact!

The mounds are found in a large desert-like area called the Caatinga. They stand between 2 to 4 meters high and are spaced almost equally apart -- between 16 to 22 meters. 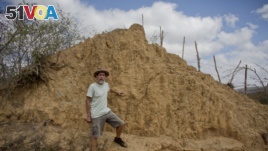 Funch told the AP he wrote two stories about the dirt mounds in Brazilian publications. But they received little, if any, attention. Funch said he was not sure how to further his research because he is not an expert in the world of insects or scientific publishing.

But then he met Stephen Martin, an entomologist with the University of Salford in England. A few years ago, Martin was studying honey bees and ants in the northeastern Brazilian state of Bahia. He was also interested in the dirt mounds.

Martin and Funch met by chance next to a river in a small town about 50 kilometers west of the edge of the mound area.

Martin spoke to Funch about seeing the volcano-like piles while he was driving. Funch told him, "You just met the only guy in Brazil who is working on these mounds."

Soon after, Funch and Martin began to study them together. A report with their findings was published last month in the journal Current Biology.

The two men found that the mounds were built by a large termite group that eats leaves and lives underground. But they did not find the termites actively working in the larger mounds. Instead, the insects were found along the edges of the mound areas.

Funch and Martin found only a small tube-like hole going to the top of each pile. They did not find an extensive system of tunnels throughout. That suggested the termites were simply finding a place to leave earth from underground, where they build their passageways.

Martin noted, "These are just waste heaps. Under normal circumstances we wouldn't see them because they wouldn't persist for such a long time."

The mounds are also very old. Scientific testing showed they were built from 690 to 3,820 years ago.

Funch and Martin say there is much they still need to investigate. They both wonder why the mounds do not appear to have active termite colonies underneath them, as well as how long it took termites to make the biggest mounds.

mound – n. a small hill or pile of dirt or stones

species – n. a class or grouping of living things

construction – n. the act of building something

column – n. something designed to support an object and built in the shape of a straight line

circumstance – n. an event or incident