Update Required To play the media you will need to either update your browser to a recent version or update your Flash plugin.
By Hai Do
11 July 2022


Sri Lanka's prime minister warned last month that the island nation's economy had collapsed. In recent days, the government itself collapsed as tens of thousands of protesters occupied the homes of its leaders.

Angry over the country's economic problems, protesters took over President Gotabaya Rajapaksa's and Prime Minister Ranil Wickremesinghe's official homes. They demanded that the two leaders step down. The incident came after months of shortages of fuel, food, medicine and other necessities.

President Rajapaksa has not been seen or heard from publicly since Saturday. His office said Sunday that he ordered the immediate release of cooking gas to the public. But the speaker of the parliament said Rajapaksa would step down on Wednesday. 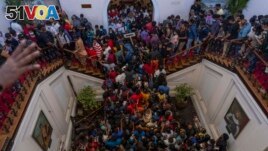 Prime Minister Wickremesinghe said Monday that he would stay on until a new government is in place because he wants to work within the constitution. The prime minister also noted that the crowd burned down his house and destroyed what he called a "treasure" of 2,500 books.

Mahinda Yapa Abeywardena is the speaker of the South Asian nation's parliament. He said Monday that the lawmakers will meet on Friday to elect a new president. In a statement, he added, "The ruling party has said the prime minister and the Cabinet are ready to resign to appoint an all-party government."

Sajith Premadasa is the leader of the main opposition party which holds 54 seats in the 225-member parliament. He said it was ready to step into the government.

"We as the opposition are ready to provide leadership to stabilize the country and rebuild the economy," he said. "We will appoint a new president, prime minister and form a government."

Dullas Alahapperuma, who was a minister under Rajapaksa, has also been involved in talks to form a new government. But the two opposition leaders have not agreed on a power-sharing deal.

If the opposition fails to form a government by the time Rajapaksa resigns, Wickremesinghe as prime minister will become acting president under Sri Lanka's constitution.

However, in line with the protesters' demand, opposition leaders do not want him to take over even as acting president. They called on Wickremesinghe to resign and permit the parliament speaker to be acting president. The position is the next in line based on the constitution.

Economists say the crisis comes from years of poor leadership and corruption. They also say it comes from other troubles, such as growing debt, the effects of the pandemic and terror attacks that hurt the tourism industry.

Sri Lankans have mainly blamed Rajapaksa for the collapse of the nation's economy. Rajapaksa appointed Wickremesinghe as prime minister in May in an effort to solve the shortages and start economic recovery. But delays in providing basic supplies have turned public anger against him with protesters accusing him of protecting the president.

The World Food Program said that nearly nine out of 10 families in Sri Lanka are going without some meals or otherwise decreasing how much they eat. The government has been seeking help from the International Monetary Fund and neighboring India and China to pay for food and fuel. And the country has $51 billion in foreign debts that it cannot repay.

The protests appear to bring an end to the nearly 20 years of rule by the Rajapaksa family.

Gotabaya Rajapaksa, a younger brother, became president in 2019. He brought Mahinda back as prime minister and appointed other family members to important government positions. Mahinda resigned in May after weeks of anti-government protests that turned violent. And Gotabaya is now on his way out.

Hai Do adapted this story for VOA Learning English from Associated Press reports with additional material from Reuters.

stabilize –v. to prevent things from getting worse