Secretary of State John Kerry debated with members of the U.S. Senate Thursday in the first public hearing on the Iran nuclear deal.

Mr. Kerry disagreed. In his words, it is "fantasy, plain and simple," to think the United States failed to wait for a better deal in negotiations. 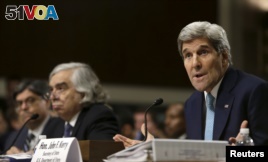 The U.S. Congress has until September 17 to approve or reject the deal. President Barack Obama has promised to veto a rejection.

The American defense chief praised Iraqi counterterrorism troops, as he watched them carry out exercises at a firing range.

Mr. Carter also was to meet with top Iraqi officials, including Prime Minister Haider al-Abadi and the country's defense minister, as well as U.S. commanders.

U.S. scientists said Thursday that they had discovered a planet similar to Earth around a distant sun-like star.

The planet is about 60 percent bigger than Earth. It was discovered using NASA's Kepler space telescope. The planet circles a star that is similar in size and temperature to the sun.

Jon Jenkins said of the discovery, "In my mind, this is the closest thing we have to another planet like Earth."

hearing – n. a meeting or session at which evidence and arguments about a crime, complaint, etc., are presented to a person or group who will have to decide on what action should be taken

veto –v. to reject (a proposed law) officially : to refuse to allow (a bill) to become a law

astronomer – n. the scientific study of stars, planets, and other objects in outer space