In the Garden: Growing Roses

Update Required To play the media you will need to either update your browser to a recent version or update your Flash plugin.
By VOA
02 June, 2014

Most kinds of rose plants come from Asia. But roses are also native to other areas including northwest Africa, Europe and the United States.

In nineteen eighty-six, the U.S. Congress chose the rose as America's national flower. Technically, Congress and President Ronald Reagan declared it the "national floral emblem." Whatever the name, the decision did not smell sweet to lovers of other flowers.

Some people say roses are difficult to grow. But you have a good chance of success if you start with a few suggestions from experts. You should plant your roses where they can get sunshine for about six hours on bright days.

You can buy roses from a garden center or by mail order. You can buy potted roses, also known as container roses, or bare-root plants. Each kind has its fans. 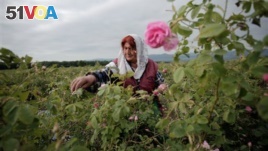 A field of roses in Bulgaria, traditionally one of the biggest exporters of high-grade rose oil, along with Morocco and Turkey

Some gardeners say potted roses are easier to plant. They say the roots develop better. But Jeffrey Dinslage, president of Nature Hills Nursery in Omaha, Nebraska, points out that bare-root roses come without soil. So they weigh less to transport.

The University of Illinois Extension advises getting bare-root roses as close to planting time as you can. If they arrive before you are ready to plant them, make sure the packing material is moist. Keep the plants in a cool, dark place. You plant the roses while they are dormant. The resting plants have no leaves but still need water.

When growing roses, the soil should feel moist deep down. Watering should be done in the morning. That can prevent problems called black spot and mildew.

But do not water too much. Jeffrey Dinslage says people often ask him about unhealthy discoloration on rose leaves. He says the spots are usually caused by too much water. After heavy rains or too much watering, he advises pulling away mulch temporarily from around the roots. This will help dry the soil.

In normal conditions, placing mulch around rose plants is a good idea. Mulch suppresses weeds and holds moisture in the soil. You can use mulch made from bark, pine needles, cottonseed or oak leaves.

If your soil is very dry, you can add peat or compost, which returns nutrients to the soil. If aphids, thrips or other insects invade your rose bushes, you may be able to force them off with just a strong spray of water.