Tsarnaev Guilty on All Counts in Boston Bombing

Update Required To play the media you will need to either update your browser to a recent version or update your Flash plugin.
By VOA
08 April, 2015


Dzhokhar Tsarnaev was found guilty on all 30 charges Wednesday linked to the Boston Marathon bombing.

Dzhokhar Tsarnaev was found guilty of several counts in connection with the deaths of four people in and after the 2013 Boston Marathon bombing. Two bombs exploded near the marathon finish line on April 15, 2013. Three people died. More than 260 other people were injured. A police officer was shot and killed on April 18, 2013, as Dzhokhar and his older brother, Tamerlan, attempted to escape police. 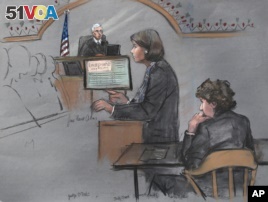 The 21-year-old Dzhokhar Tsarnaev faces possible death sentences for many of the 30 guilty findings. The state of Massachusetts has not executed anyone since 1947.

Kurdish security officials say the Islamic State group has freed at least 216 members of Iraq's Yazidi community. They had been captives for eight months.

Witnesses say the release took place Wednesday in the northern province of Kirkuk.

The mass release is the second of its kind, after some 200 Yazidis were freed in January by the Islamic State group following five months in captivity.

An Afghan soldier shot and killed a U.S. soldier Wednesday in Jalalabad, Afghanistan. He also shot and wounded at least two others. The Afghan soldier was killed in return fire.

A senior American diplomat had just finished security talks with area leaders in Jalalabad. The region's police chief said a group of American soldiers helped with security for the high-level meeting.

The police chief said the Afghan soldier began to shoot at the American soldiers as they were leaving the area.

Officials say they are investigating the attack.

execute – v. to kill (someone) especially as punishment for a crime

captive – n. someone who is captured and kept as a prisoner