Update Required To play the media you will need to either update your browser to a recent version or update your Flash plugin.
By VOA
22 April, 2015


Yemeni security officials say the Saudi-led coalition launched new airstrikes Wednesday on the Houthi rebels. The airstrikes came a day after Saudi Arabia had declared an end to the air campaign targeting the Iran-backed rebels.

Yemeni officials said airstrikes hit the Houthi rebels in Taiz, Yemen's third-largest city, and in the southern port city of Aden. The rebels had seized control of a military brigade headquarters near Aden's old airport.

Saudi Arabia announced on Tuesday it would end the month-long airstrikes. Iran welcomed the announcement and called it a "step forward" toward a political resolution. 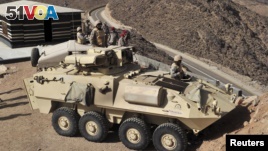 Saudi army are seen deployed along the Saudi border with Yemen April 21, 2015. REUTERS/Stringer

French officials announced on Wednesday the arrest of an Islamic extremist suspected of planning attacks on one or more churches.

France's Interior Minister said police arrested a 24-year-old student on Sunday. The French-Algerian student is suspected of being an Islamist extremist.

The minister said police discovered several weapons in his car, parked in a Paris neighborhood. He said they also discovered documents showing a plan to attack one or two churches in the Paris suburb of Villejuif.

The two leaders held a bilateral meeting during the Asian-African Summit in Jakarta, according to Japanese officials.

The officials did not say how long the meeting lasted or what topics were discussed.

Relations between the two powerful Asian nations have been strained over a territorial dispute. China also feels that Japan is not apologizing for its colonial-era aggression toward China and other Asian neighbors.