Update Required To play the media you will need to either update your browser to a recent version or update your Flash plugin.
By VOA
29 April, 2015


The United Nations said Wednesday that it was beginning to provide food and medicine around the town of Ghorkha, Nepal. That area was the epicenter of the powerful earthquake that shook the country Saturday.

Rescue workers continue to search the ruins left by the magnitude-7.8 quake. Tuesday night, a French team pulled a man from his collapsed home in the capital, Kathmandu. He had been trapped for more than 80 hours.

Nigeria's military has freed almost 300 girls and women from the Boko Haram militant group. Officials have not identified the 200 girls and 93 women. The Nigerian military says it rescued them in the Sambisa Forest. 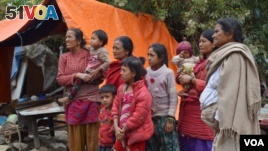 A family stands next to a tent in front of their destroyed home. They prefer to stay here instead of sheltering in a school because they are worried about their valuables being plundered from the rubble, Sankhu, Nepal, April 29, 2015. (Steve Herman/VOA)

Boko Haram has kidnapped hundreds of people in northeastern Nigeria and neighboring Cameroon. Last April, the militants kidnapped 219 schoolgirls from the town of Chibok.

Some of the former captives may have nowhere to return. Experts says many may not be able to go home because Boko Haram has destroyed their houses, families or businesses, or continues to threaten their towns.

Australia has withdrawn its ambassador to Indonesia after it executed two Australian prisoners early Wednesday.

Andrew Chan and Myuran Sukumaran were killed along with six other prisoners from Brazil, Nigeria and Indonesia. They had been sentenced to death for drug convictions.

The international community had protested the death sentences. But, officials in Indonesia said the punishments are an important part in its fight against the drug trade. Australian Prime Minister Tony Abbott said the country's ambassador to Indonesia was withdrawn to protest the executions.

Violence and rioting in Baltimore, Maryland have led officials to make changes to plans for professional baseball on Wednesday. The situation had already led to postponements of games Monday and Tuesday between the Baltimore Orioles and Chicago White Sox.

Wednesday's game will be played with few people present other than officials and players of the teams. No fans will be permitted into the game even if they bought tickets.

Major League Baseball officials said they made the decision in the interests of public safety. The start time of the game was also changed to earlier in the day.

epicenter – n. the part of the earth's surface that is directly above the place where an earthquake starts

captive – n. captured and kept in a prison, cage, etc.