Update Required To play the media you will need to either update your browser to a recent version or update your Flash plugin.
By VOA
05 August, 2015


Malaysia's leader has confirmed that a piece of an airplane wing found on an Indian Ocean island belonged to Malaysia Airlines Flight MH370. The airplane disappeared 17 months ago while flying from Kuala Lumpur to Beijing, China.

Prime Minister Najib Razak made the announcement on Malaysian television.

The plane was carrying 239 passengers and crew when it disappeared. Relatives of the victims say the finding does not bring them closure. They say many questions remain and that the entire plane must be found. 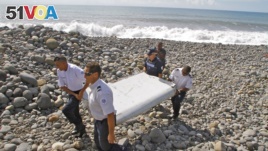 US forces in Turkey attack Islamic State in Syria

The U.S. military says its forces in Turkey have carried out their first strike against Islamic State fighters in Syria.

U.S. military officials said an unmanned aircraft carried out the cross-border strike Wednesday. American warplanes began arriving at an air base in southern Turkey earlier in the day.

Turkey and the United States plan joint military action to clear IS militants from a part of Syria near the Turkish border.

President Barack Obama strongly defended the international deal to restrict Iran's nuclear program Wednesday. He spoke at American University in Washington, D.C. He said the deal "cuts off all of Iran's pathways to a bomb."

A Zimbabwe court has delayed the trial for a Zimbabwean hunter accused of helping to kill a beloved wild lion called Cecil.

Magistrate Lindiwe Maphosa said she has delayed the trial of Theodore Bronkhorst until late next month.

The man's lawyer told reporters that he had sought the postponement.

American hunter Walter Palmer shot and killed the lion last month. He is believed to have paid Mr. Bronkhorst $55,000 for safari guide services connected to the killing.

beloved – adj. very much loved: dearly loved
magistrate – n. a local official who has some of the powers of a judge
safari – n. a journey to see or hunt animals especially in Africa