Update Required To play the media you will need to either update your browser to a recent version or update your Flash plugin.
By VOA
27 August, 2015


As many as 50 refugees were found dead inside a truck in Austria Thursday. An Austrian official confirmed that a truck had been found on a road near the town of Parndorf. He did not say the exact number of people found inside the truck. The victims reportedly suffocated.

The migrants were found on the same day that European leaders met in Vienna to discuss ways to deal with the growing migrant crisis.

German Chancellor Angela Merkel is attending the migrant crisis meeting. She called the discovery of the migrants a "warning to work to solve this problem and show solidarity."

Austria's foreign minister on Thursday presented ideas for a five-point plan that would establish areas where people seeking asylum in the European Union could be processed. If they qualify, they would be given safe passage to Europe. 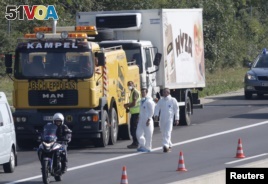 A truck in which up to 50 migrants were found dead, is prepared to be towed away on a motorway near Parndorf, Austria, Aug. 27, 2015.

President Barack Obama visited New Orleans Thursday to meet with people of the city flooded by Hurricane Katrina. New Orleans is preparing to mark the 10th anniversary of the storm.

The president praised the effort to rebuild the city. He said it was an example of when "good people come together to lend a hand, and build a better future."

Hurricane Katrina caused more than $135 billion in damage. It was the costliest natural disaster in United States history.

The storm that hit New Orleans on August 29, 2005, left more than 80 percent of the city underwater. Hurricane Katrina killed 1,800 people and displaced 1 million others.

Last Sunday, the Chinese government changed financial rules to permit retirement funds to invest in the stock market. The move means the retirement pay of 200 million Chinese will be tied to the gains and losses of stock trading.

suffocate – v. to die because you are unable to breathe

solidarity – n. a feeling of unity between people who have the same interests or goals

natural disaster – n. a sudden and terrible event in nature (such as a hurricane, tornado, or flood) that usually results in serious damage and many deaths