Update Required To play the media you will need to either update your browser to a recent version or update your Flash plugin.
By VOA
03 February, 2015


The Jordanian pilot held by Islamic State militants reportedly is dead. Photos released on social media Tuesday appear to show the pilot being burned to death.

Jordanian State television says Jordan confirmed the pilot's death and said he was killed on January 3.

The Jordanian military condemned the killing and promised it would not go unpunished.

A family member of the pilot told Reuters news agency that they learned of his death from the chief of Jordan's armed forces.

U.S. President Barack Obama said Tuesday that if the video is real, it would be another sign of the "viciousness and barbarity" of the militant group. 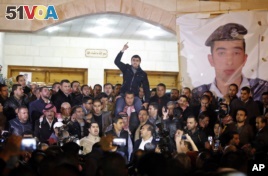 The pilot had been at the center of a prisoner and hostage exchange involving Jordan, Japan and an Iraqi insurgent imprisoned in Jordan. Jordan had demanded proof that the pilot was alive before they would release the Iraqi prisoner.

Al Jazeera reporter Mohamed Fahmy could soon be released from prison in Egypt now that he has surrendered his Egyptian citizenship.

Mr. Fahmy had been a citizen of both Egypt and Canada.

Mr. Fahmy and other reporters spent more than 400 days in prison after their arrest in December 2013. They were charged with aiding the Muslim Brotherhood, which Egypt considers a terrorist group.

Egyptian officials expelled another Al Jazeera reporter earlier this week. He was returned to his home country of Australia.

Hundreds of Chadian ground troops entered northeastern Nigeria Tuesday as part of a growing effort in the area to fight Boko Haram insurgents.

Witnesses said Chadian soldiers and vehicles crossed a bridge from Cameroon into the Nigerian town of Gambaru. Another Chadian force of at least 300 soldiers deployed near Bosso, a town on the border between Nigeria and Niger.

Chad is one of four countries that have promised to help fight Boko Haram, along with Cameroon, Niger and Benin.

Harper Lee, the writer of the American novel, "To Kill a Mockingbird," announced Tuesday that she will publish a second book this July. "To Kill A Mockingbird" came out in 1960 and was immediately popular. At least forty million copies have been sold. The book was also made into a play and a film.

The new book "Go Set a Watchman" will be released on July 14. It will be Ms. Lee's first in 55 years. The book is a sequel to "To Kill a Mockingbird."

The publishing company Harper said that Ms. Lee completed the novel in the 1950s, before "To Kill a Mockingbird." The Pulitzer Prize-winning author rediscovered her early work last year.