Kerry: US Won't 'Close Eyes' to Russian Aggression in Ukraine

Update Required To play the media you will need to either update your browser to a recent version or update your Flash plugin.
By VOA
05 February, 2015


U.S. Secretary of State John Kerry said Thursday that the United States would not ignore Russian tanks and soldiers crossing into eastern Ukraine. Mr. Kerry spoke to reporters in Ukraine.

Mr. Kerry urged Russia to show its support for a peaceful, diplomatic solution to the conflict in eastern Ukraine. He said Russia should stop its military support for the separatists. 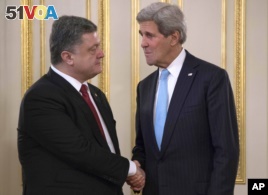 Mr. Kerry also met with Ukrainian Prime Minster Arseniy Yatsenyuk later Thursday. The two men spoke to reporters after the meeting. Mr. Kerry said it was up to Russian President Vladimir Putin to "make the choices that could end this war."

The Islamic State executed a Jordanian fighter pilot by burning last month. The militants captured him after his plane went down in Syria.

King Abdullah visited the pilot's family at their home in southern Jordan Thursday. He told the family that Jordan will continue the fight to defend their religion, the country and the Jordanian people.

Cameroon said at least 91 civilians have been killed by Boko Haram since the Nigerian militants invaded Cameroonian villages Wednesday.

Cameroon's defense minister told VOA that six Cameroonian soldiers and 13 Chadian soldiers have also died in fighting with gunmen around the border town of Fotocol.

The minister said at least 500 people have also been wounded. He said the number of deaths may increase because most of the injured are not in hospitals.

South Korea and China have agreed to set up a military hotline – or emergency communications system – between the two defense ministries.

South Korean and Chinese defense ministers reached the deal Wednesday at a meeting in Seoul.

A South Korean spokesman said Thursday that the two sides would move quickly to establish the hotline. He said Seoul expects to begin communications with Beijing about the stabilization of the Korean peninsula and North Korean aggressive actions.

The hotline is expected to open as early as the first half of this year.

hotline – n. a direct telephone line set up for a specific purpose, especially for use in emergencies or for communication between heads of government