Obama: ‘Ugly Lie’ that West is at War with Islam

Update Required To play the media you will need to either update your browser to a recent version or update your Flash plugin.
By VOA
19 February, 2015


The United States' president declared Thursday that any claim by terrorists that Western nations are fighting a war against Islam is an "ugly lie."

President Barack Obama spoke during a visit to the State Department in Washington. The comment came at an administration-supported anti-terrorism conference.

In his speech, Mr. Obama promised a relentless fight against the self-declared Islamic State and other terrorist groups. He rejected the idea that mostly Christian and Jewish Western nations have launched a war against Muslims.

The president urged conference delegates to "confront the warped ideology" used by terror groups, especially efforts to use Islam to justify violence. 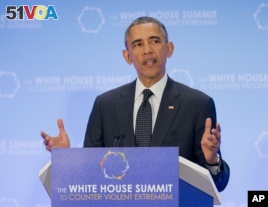 Earlier Thursday, United Nations Secretary-General Ban Ki-moon spoke at the meeting. He told officials from more than 60 countries that preventing violent extremism and support of human rights go, in his words, "hand in hand."

The president of Ukraine has condemned the seizure of an eastern Ukrainian town by pro-Russian rebels.

President Petro Poroshenko said the takeover of the town of Debaltseve violates a ceasefire agreement. He and leaders of three other nations agreed on the truce at talks last week in Minsk, Belarus.

Mr. Poroshenko spoke by telephone Thursday with the leaders of Russia, Germany and France. He told them "not to pretend that what happened in Debaltseve was in line with the Minsk agreements." The ceasefire went into effect Sunday.

On Wednesday, thousands of Ukrainian troops withdrew from Debaltseve. The town links the separatist-held areas of Donetsk and Luhansk.

Britain has rejected calls to send international forces to Libya and to lift restrictions on arms shipments to the North African nation. Foreign Minister Philip Hammond said Britain wants a political solution to the Libyan conflict. He spoke Thursday during an official visit to Algeria.

The British announcement came a day after a United Nations Security Council meeting on violence in Libya. The Libyan foreign minister called the situation in his country, "disastrous." He told Council members that the world has a responsibility to guarantee peace and security.

Egypt appealed for foreign intervention after militants publicized the killings of 21 Egyptians earlier this week. The militants expressed support for the Islamic State.

Hollywood Preparing for the Oscars

Hollywood is preparing for the Academy Awards ceremony in Los Angeles, California. It is the most important event of the year for the movie industry. The award show takes place on Sunday afternoon, California time.

The winners will walk away with Academy Awards, also called the Oscars. A few of the nominees are the film drama Birdman, and its director, Mexican filmmaker Alejandro Inarritu. American actor Michael Keaton received a best actor nomination for his work in the film.

Richard Linklater's film Boyhood was nominated for several Oscars. The film, shot over a 12-year period, stars Ethan Hawke and Patricia Arquette. Both are nominated for their supporting roles in Boyhood.

Among foreign-language film nominees are the corruption story Leviathan from Russia and the French-Mauritanian film Timbuktu. Timbuktu is based on real events in northern Mali under jihadist rule in 2012.

Virunga is among the nominated films for best documentary feature. It looks at efforts to save mountain gorillas in the Democratic Republic of Congo.

nominate – v. to choose (someone or something) as a candidate for receiving an honor or award