Update Required To play the media you will need to either update your browser to a recent version or update your Flash plugin.
By George Grow
13 January, 2015


French lawmakers have agreed to extend the country's involvement in airstrikes against Islamic State militants in Iraq. The agreement comes a week after three men who expressed loyalty to Islamist groups killed 17 people in Paris.

French Prime Minister Manuel Valls spoke before the vote in the National Assembly Tuesday. He said that France is at war against extremists, not religion.

The head of Europe's police organization announced on Tuesday that up to 5,000 Europeans have joined fighting in Syria. The announcement raises concerns about militants returning to their home countries to carry out terror attacks. 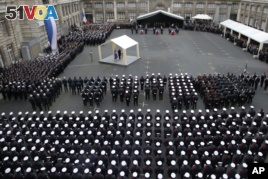 French President Francois Hollande delivers his speech, at left, during a ceremony to pay tribute to the three police officers killed in the attacks, in Paris, France, Jan. 13, 2015.

France is one of several European and Middle Eastern countries that have joined an international coalition against the Islamic State. The militant group seized large parts of Syria and Iraq in the past year.

In France, people have been remembering the three police officers who were killed in the terror attacks in Paris. French President Francois Hollande spoke a memorial service for the three. He praised their heroism and recognized them by presenting the Legion of Honor award. "Thanks to you," he said, "France is standing. Long live the Republic. Long live France."

Funerals were also held in Jerusalem for four Jewish victims of the attacks in Paris.

Last week, two gunmen killed 12 people at the offices of the weekly newspaper Charlie Hebdo. The publication is known for cartoons that make fun of religions and public officials. Charlie Hebdo is set to reappear in stores on Wednesday. It will include an image of someone said to be the Prophet Mohammed. He will be seen holding a sign that says "I Am Charlie" under the headline "All is Forgiven."

Ukrainian officials say 10 civilians were killed Tuesday when a shell or missile hit a bus south of the separatist-controlled city of Donetsk. The press center for the Ukrainian government's military operation against Russian-supported separatists in eastern Ukraine reported the deaths. It said 13 others were injured.

Ukrainian media reported that the chief of the Donetsk regional interior ministry department said the bus was hit by a rebel artillery shell. The official answers to the central government in Kyiv. But the defense ministry of the separatists' self-declared Donetsk People's Republic denied that rebel forces were involved. Russia's Tass news agency reported the denial.

News of the incident came as a planned meeting on the Ukraine crisis was postponed. The meeting was to have involved the leaders of France, Germany, Russia and Ukraine. The foreign ministers of the four countries met Monday in Berlin, but failed to make progress on enacting a ceasefire agreement between Ukraine's central government and rebels. The four leaders were to have met Thursday in Kazakhstan.

Pope Francis has spoken about the need for "justice, healing and unity" in Sri Lanka. The pope spoke at the international airport in the Sri Lankan capital, Colombo, at the start of a week-long trip to Asia.

The Roman Catholic leader said Sri Lanka needs to seek the truth of what happened during its long civil war. He said rebuilding must include a respect for human rights and what he called "the full inclusion of each member of society." Pope Francis will spend two days in Sri Lanka before traveling to the Philippines. The visit to Asia is his second since taking office. The Vatican says the pope will speak through his Asia trip on issues like the environment, poverty and family.

*This report was based on stories from VOA's News Division. George Grow wrote this newscast for VOA Learning English. Jim Tedder was the editor.

extend - v. to stretch out in area or length; to continue for a longer time

loyalty - n. the quality of being loyal

shell - n. a metal container that is fired from a large gun and exploded when it reaches its target