Update Required To play the media you will need to either update your browser to a recent version or update your Flash plugin.
By VOA
14 January, 2015

In a video, a man identified as the leader of Al-Qaida in the Arabian Peninsula said his group planned and paid for the attack. He called the raid an "act of vengeance" for the Prophet Muhammed. The video appeared Wednesday on the Internet.

The al-Qaida leader said Ahmed Coulibaly was not operating as part of the same group. 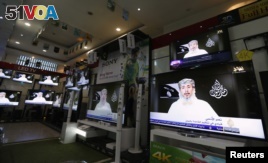 Nasr al-Ansi, a leader of the Yemeni branch of al-Qaida (AQAP), is shown on televisions in at a shop in Sana'a, Yemen, stating that AQAP claims responsibility for the attack on Charlie Hebdo last week.

Copies of the latest Charlie Hebdo sell out quickly

Parisians waited in long lines Wednesday morning to buy the latest edition of Charlie Hebdo. All across the French capital, copies of the magazine were sold out within minutes. Charlie Hebdo often publishes anti-religious pieces and cartoons of famous people. On Wednesday, the magazine had an illustration of the Prophet Mumammed holding a sign that reads, "I am Charlie." Next to the picture, a sentence says, in French, "All is forgiven."

The magazine's publishers planned to produce three million copies of the latest issue. That compares to the normal print run of about 60,000. A spokesman for Charlie Hebdo's distributor says another two million copies will be ordered because of the high demand.

This underwater photo shows the wreckage of AirAsia Flight QZ 8501 lying on the sea floor in the Java Sea.

Singapore's defense minister says a Singaporean navy ship has found the fuselage of AirAsia Flight 8501. The official said in a Facebook post that a remotely operated vehicle took images that showed lettering on the fuselage, the main part of the airplane. He said the pictures also showed part of the plane's wing.

He said Indonesian officials have been informed so they can begin recovery operations.

The plane crashed into the Java Sea on December 28. Indonesian divers found the plane's flight recorders earlier this week. So far, 48 bodies of the 162 people on the plane have been recovered.

Japan has announced its biggest defense budget ever.

Prime Minister Shinzo Abe's cabinet approved a $42 billion budget Wednesday. It is Japan's third defense budget increase in three years. The budget must be approved by Japan's legislators, but Mr. Abe has majority support in both houses.

The Japanese government is in a territorial dispute with China's government over a group of islands called the Diaoyus in China and the Senkakus in Japan.

vengeance - n. the act of doing something to hurt someone because that person did something that hurt you or someone else

illustration - n. a picture or drawing in a book, magazine, etc.

distributor - n. a person or company that supplies stores or businesses with goods