Update Required To play the media you will need to either update your browser to a recent version or update your Flash plugin.
By VOA
29 January, 2015

Jordan has demanded proof that a pilot the Islamic State group threatened to kill is still alive, as a deadline set by the militants in a prisoner exchange expired Thursday.

The Islamic State threatened to kill the Jordanian pilot and a Japanese hostage, unless Jordan released an Iraqi suicide bomber by sunset Thursday. The Islamic State demanded that she be delivered to the Turkish border.

A Jordanian government spokesman said one hour after the deadline that the prisoner would only be released if the Islamic State gave proof the Jordanian pilot was still alive. 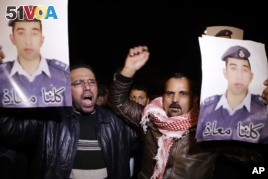 People from the al-Kaseasbeh tribe and other tribes take part in a demonstration outside of Jordan's cabinet in Amman calling for the release of Jordanian pilot Lt. Mu'ath al-Kaseasbeh, who is held by Islamic State group militants, Jan. 27, 2015.

The spokesman later told reporters that Jordan and Japan were working together to secure the release of the Japanese hostage as well.

Explosion near hospital in Mexico kills at least seven

A gas truck exploded and destroyed part of a maternity hospital in Mexico City Thursday morning. At least seven people were killed.

Mexico City's mayor said at least 54 people were injured, 22 of them children.

Rescue workers are searching for survivors. Officials said people were likely still buried in the rubble.

Israeli Prime Minister Benjamin Netanyahu has blamed Iran for Wednesday's deadly fighting along the Lebanese border. The fighting was the most severe since the 2006 war between Israel and the Iranian-backed militant group Hezbollah.

Mr. Netanyanu said on Thursday Israel will continue to defend itself against all threats, "near and far alike."

WHO focus on Ebola shifts to ending outbreak

The World Health Organization said Thursday it is in the "second phase" of their response to slowing the worst-ever outbreak of Ebola. Officials will stop working to quickly build treatment facilities. The efforts now will be centered on efforts to find infected people and manage their cases.

The number of new cases this week fell to its lowest level since last June.

However, U.N. Ebola coordinator David Nabarro warned Thursday that the disease is still present in one-third of the areas of the three worst affected west African nations. A total of 99 new cases were reported last week in Guinea, Liberia and Sierra Leone, according to WHO figures.

proof – n. something that shows something else is true or correct

maternity – adj. used to refer to an area in a hospital where women who are giving birth to babies are cared for

figure – n. a value that is expressed in numbers