U.S. and Cuba to Reopen Embassies

Update Required To play the media you will need to either update your browser to a recent version or update your Flash plugin.
By VOA
01 July, 2015 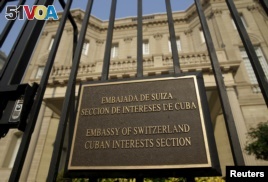 The Cuban Interests Section is seen in Washington, July 1, 2015

Mr. Obama said U.S. Secretary of State John Kerry will travel to Havana this summer to raise the U.S. flag over the first American embassy there in over 50 years.

Earlier Wednesday, the top American diplomat in Havana delivered a letter from the U.S. to Cuba about restoring embassies in the two capitals.

An Egyptian group connected to the Islamic State militants claimed responsibility for attacks Wednesday in the Sinai Peninsula. Egyptian security officials say at least 20 soldiers died in the attacks.

The attacks against several military checkpoints included a suicide bombing near the town of Sheikh Zuweid.

The Islamic State group said the militants hit 15 different checkpoints in the attack.

Liberia has confirmed two mores case of Ebola, a few days after a young boy died from the virus.

Liberian President Ellen Johnson Sirleaf says while this is very disturbing, she is confident the country has it under control.

President Sirleaf said that health officials are trying to find the source of the newest Ebola cases in her country.

The U.S. women's soccer team has advanced to the final game of the FIFA World Cup tournament in Canada. The team beat Germany in a semifinal match on Tuesday, 2-0.

The U.S. team will play the winner of the other semifinal game Wednesday, as 2011 World Cup champion Japan plays England in Edmonton, Alberta.

checkpoint – n. a place where people, cars, etc., are searched by someone (such as a police officer) before being allowed to continue