Update Required To play the media you will need to either update your browser to a recent version or update your Flash plugin.
By VOA
02 June, 2015


Chinese authorities are working quickly to reach survivors still trapped under a passenger ship that capsized -- or turned over -- in the Yangtze River late Monday. More than 450 passengers and crew were on board the ship when it went down. Most of the passengers were elderly Chinese tourists.

Only 15 people are known to have gotten out alive. More than 400 passengers are still missing. The People's Daily website reported late Tuesday three bodies were found 50 kilometers from the wreckage site.

Boko Haram militants have again attacked the Nigerian city of Maiduguri. The city is set to be the new base of government operations aimed at defeating the group. 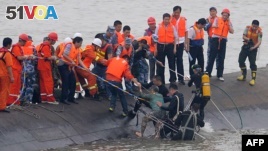 A 65-year-old woman, center, is rescued by divers from the Dongfangzhixing or "Eastern Star" vessel which sank in the Yangtze river in Jianli, central China's Hubei province, June 2, 2015. (AFP Photo)

Reports from the city said fighters used grenades in Tuesday's attack but were unable to advance beyond the city limits.

Later, a suicide bomber attacked a cattle market in Maiduguri. Early reports said up to 20 people died in the explosion.

Police in northern Afghanistan said Tuesday unknown gunmen have shot dead at least nine employees of an aid agency. The attack took place in Balkh province. The victims were from the non-governmental organization, People in Need.

The United Nations warned last month that the Afghan conflict has caused a record rise in civilian deaths in the first few months of 2015, compared to the same period in 2014.

No one has claimed responsibility for Monday's killings of aid workers in Balkh.

US Senate votes on spy programs

The Senate voted 67-32 in favor of legislation already approved by the House of Representatives. It was then sent to President Barack Obama for his signature. Mr. Obama says he will quickly sign the legislation. He says the new rules protect both civil liberties and national security.

trap – v. to cause (a person or animal) to be unable to move or escape from a dangerous place

base –n. the main place in which a person works or lives or a business operates