Leaders of seven industrial countries have opened a second day of talks in Germany. The G7 leaders are discussing climate and energy issues. They also are to meet with top officials from African nations.

President Barack Obama and German Chancellor Angela Merkel met separately on Sunday. After that meeting, Mr. Obama said the G7 leaders would talk about keeping Europe and its economy strong. He said they also planned to discuss a united stand against what he called "Russian aggression" in Ukraine, and dealing with extremism and climate change. 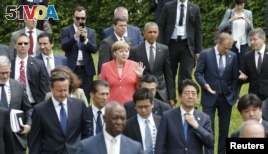 German Chancellor Angela Merkel (C) and U.S. President Barack Obama arrive with other G7 participants for a family picture at the G7 summit at the Elmau castle in Kruen near Garmisch-Partenkirchen, Germany, June 8, 2015. (REUTERS/Christian Hartmann)

The Obama administration said the U.S. and Germany agreed that how long economic actions against Russia stay in place depends on whether a cease-fire in Ukraine continues. This year, like last, Russian President Vladimir Putin was not invited to the G7 meetings. The invitation was not extended last year after Russia took control of the Crimean peninsula.

Turkey's ruling Justice and Development Party lost its majority in Parliament in voting on Sunday. It is the biggest loss for the party since it came to power 13 years ago. It will now be forced to form a coalition government.

The defeat will hurt plans by President Recep Tayyip Erdogan to increase his powers.

Unofficial results show the Justice and Development Party won 41 percent of the votes. Four years ago, it won almost 50 percent.

Yemen's President says peace talks will not include rebels

The internationally-recognized president of Yemen says talks set for Sunday about the future of his country will not include Houthi rebels. The rebels forced President Abdu Rabbu Mansour Hadi to flee the country earlier this year.

United Nations officials have organized the talks, which are to take place in Geneva, Switzerland.

Mr. Hadi told Al-Arabiya television that the talks will only be about putting in place a U.N. Security Council resolution. The Council's members approved the resolution in April. It calls for the Houthis to leave the areas they have seized and to end the use of violence.

The Houthis took control of Yemen's capital, Sana'a, in September after months of attacks. In March, they seized the southern city of Aden, forcing Mr. Hadi to flee to Saudi Arabia.

A sixth person in South Korea has died from Middle East Respiratory Syndrome, also known as MERS. The country's Health Ministry announced the death on Monday. It said the victim was an 80-year-old man who was being treated for pneumonia. He died at a hospital in Daecheong. The ministry says 87 people have been infected with the disease in South Korea.

Almost 2,000 schools have been closed in South Korea in an effort to stop the virus from spreading. The government said it is also increasing medical exams of people who are barred from leaving home because they may have been infected.

There is no cure or vaccine for MERS. It was first reported in Saudi Arabia in 2012 and has spread to several other countries.

More than 200 police officers are searching for two murderers who escaped from a prison in the American state of New York. The prison is about 100 kilometers from the border with Canada.

Officials say the men used electric-powered tools to cut through the prison walls sometime between late Friday and early Saturday. They left clothing in their beds to trick the guards into thinking they were sleeping.

It is the first time anyone has escaped from the 150-year-old high-security prison.