Update Required To play the media you will need to either update your browser to a recent version or update your Flash plugin.
By VOA
22 June, 2015


Heavily armed Taliban militants attacked Afghanistan's parliament building Monday as lawmakers met inside. The attack began with a powerful explosion at the main entrance. Other explosions sent smoke rising from the building in Kabul.

An Afghan Interior Ministry official says seven Taliban gunmen took part in the attack. The gunmen reportedly wore explosives around their bodies. The official said security forces killed all of the attackers. He said no lawmakers were hurt. However, Afghan officials said at least 30 people were hurt.

A Taliban statement claimed responsibility for what it called a suicide mission. 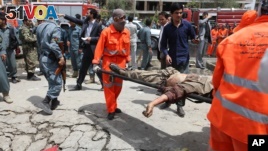 An Afghan municipality worker carries the body of a Taliban after clashes in front of the Parliament, in Kabul, Afghanistan, June 22, 2015.

The United States embassy in Kabul strongly condemned the attack. An embassy statement said, "The attack on Parliament shows blatant disrespect for democracy and the rule of law."

European Union foreign ministers officially agreed Monday to extend economic sanctions against Russia for an additional six months. The sanctions are meant to punish Russia for its involvement in the conflict with Ukraine.

The agreement came during a meeting of the EU's foreign ministers in Luxembourg. EU representatives had expressed support for the measure last week.

The economic sanctions target Russia's energy, defense and financial industries. They have been in place since July 2014 -- four months after Russia took control of Ukraine's Crimean Peninsula.

US: No desire for conflict with Russia

U.S. Defense Secretary Ashton Carter said Monday that economic sanctions are having an effect in answering Russian "aggression" in Ukraine. He also said there is neither a desire for a return to Cold War tensions nor for a new conflict with Russia.

Secretary Carter spoke at a conference in Berlin, where he met with Germany's defense minister. He added that while the West is not looking to be enemies with Russia, it will defend itself if necessary.

The U.S. official will travel Tuesday to Estonia for meetings with the defense ministers of Estonia, Latvia and Lithuania. All three countries were once under the influence of the government in Moscow and the Soviet Union.

A historic church in South Carolina reopened on Sunday for its first religious service since a white gunman attacked a Bible study group last week.

A visiting clergyman, the Reverend Norval Goff, took the place of the leader of the Emanuel African Methodist Episcopal Church in the city of Charleston. Clementa Pinckney was among the nine people killed on Wednesday in what police are investigating as a hate crime.

The Reverend Goff urged the crowd to depend on God as they mourn the victims.

Visitors from Charleston and as far away as California filled the religious center. Churches across Charleston rang their bells at the same time as a show of support before prayer gatherings in the city.

mission – n. an operation; being sent out to perform a special service

sanctions – n. measures or actions designed to punish something

Cold War – n. – relating to the period when the United States competed against the Soviet Union