Update Required To play the media you will need to either update your browser to a recent version or update your Flash plugin.
By VOA
24 June, 2015


President Barack Obama on Wednesday announced a reform of U.S. policies for dealing with kidnappers. Mr. Obama said the U.S. will use "all instruments of national power" to recover Americans held by terrorists in other countries.

The president also said the government could and would "assist private efforts to communicate with hostage-takers."

The United States' policy bars paying ransoms. However, Mr. Obama said the government will no longer threaten legal action against families who choose to pay ransom to win their relatives' release. 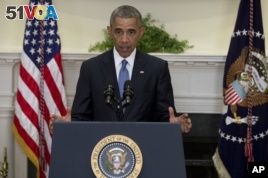 President Barack Obama speaks in the Roosevelt Room of the White House in Washington, June 24, 2015, about the completion of the Hostage Policy Review. (AP Photo/Carolyn Kaster)

Mr. Obama made the comment to French President Francois Hollande. On Tuesday, the website WikiLeaks released documents that it said show the U.S. National Security Agency spied on French presidents from 2006 to 2012.

Obama administration officials said the president told Mr. Hollande that the U.S. has and would continue to honor its 2013 promise not to "target the communications" of the French leader.

President Hollande held an emergency meeting of his ministers and army commanders after the release of the WikiLeaks documents. France is also sending a top intelligence official to Washington to confirm the spying is over, a government spokesman said.

Overnight talks about the Ukraine conflict ended late in Paris with little sign of progress.

Foreign ministers of France, Germany, Russia, and Ukraine restated their support for the cease-fire plan agreed to in February at meetings in Minsk, Belarus.

However, continued fighting between Russia-backed rebels and Ukrainian forces may affect the deal.

The Minsk deal calls for a truce and heavy weapons withdrawal. After, rebel-held areas are to get more autonomy and hold elections under Ukrainian law.

Bomber Dzhokhar Tsarnaev apologized in court Wednesday for his deadly attack on the 2013 Boston Marathon.

"I am sorry for the lives I have taken, for the suffering that I have caused you, for the damage I have done, irreparable damage," he said. The court in Boston, Massachusetts was holding a hearing to officially sentence the 21-year-old to death.

Earlier Wednesday, he listened as many bombing victims and their loved ones spoke to him about his "cowardly" and "disgusting" acts.

ransom – n. money that is paid in order to free someone who has been captured or kidnapped

irreparable – adj. too bad to be corrected or repaired

autonomy –n. the state of existing or acting separately from others

cowardly – adj. afraid in a way that makes you unable to do what is right or expected