Update Required To play the media you will need to either update your browser to a recent version or update your Flash plugin.
By VOA
25 June, 2015

After the ruling was announced, President Obama tweeted: "Today's decision is a victory for every hardworking American. Access to quality, affordable health care is a right, not a privilege." 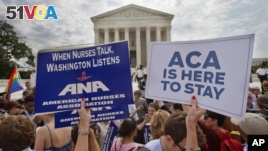 Supporters of the Affordable Care Act hold up signs as the opinion for health care is reported outside of the Supreme Court in Washington, June 25, 2015. (AP Photo/Jacquelyn Martin)

A Syrian Kurdish politician told VOA that Islamic State fighters carried out several suicide attacks in and around Kobani, killing 23 civilians in one of them. He said IS militants were also killed in the attack.

Kurdish fighters, backed by U.S.-led airstrikes, took control of Kobani in January after months of battles with Islamic State.

Pakistan has denied Afghanistan's claim that a Pakistani intelligence agent took part in an attack on the Afghan parliament.

A Pakistani foreign ministry official said his country is committed to good relations with Afghanistan. He also said the two countries had agreed to cooperate on fighting terrorism.

privilege – n. a right or benefit that is given to some people and not to others

fundamentally – adv. at the most basic level