Update Required To play the media you will need to either update your browser to a recent version or update your Flash plugin.
By VOA
26 June, 2015


In the News today,

Tunisian officials say at least 28 people, including some foreigners, have been killed in a terrorist attack near a hotel along the Mediterranean coast.

Officials say gunmen opened fire Friday on people on a beach near the Imperial Marhaba hotel in the Tunisian city of Sousse. The city is popular with visitors from Europe and other North African countries.

Officials say at least one gunman is dead. Another gunman reportedly is still free. 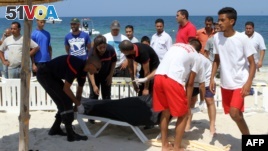 French President Francois Hollande said a suspect was arrested in what he called a "terrorist" attack at a U.S. gas factory near the French city of Lyon. At least one person was killed in the attack.

The suspect, Yassine Salhi, 35, had lived in the Lyon area. The French government said he was under surveillance between 2006 and 2008. The suspect was known to be connected to Salafist Muslims.

The attack took place at a factory owned by Air Products, a U.S. gas technology company. Investigators found a human head on the gates of the factory, reportedly with a banner or flag with Arabic writing.

Islamic State fighters have killed at least 146 civilians during an attack on the Kurdish-held town of Kobani.

The Syrian Observatory for Human Rights group said it is the second-largest mass killing of Syrian civilians by the Islamic State militants. The fighting began early Thursday when Islamic State fighters dressed as Kurdish soldiers set off a car bomb near the town's border crossing with Turkey. The human rights group told VOA fighting was continuing as of early Friday.

A group connected to the Islamic State has claimed responsibility for a suicide bombing at a Shi'ite mosque in Kuwait's capital. At least 25 people died in the attack.

The group known as Najd Province said it carried out the attack at Kuwait City's Imam Sadiq Mosque. The bomber set off his explosives while the mosque was full of worshippers attending Friday prayers.

The president knew Reverend Pinckney and visited the Emanuel AME church during his 2008 presidential campaign.

responsibility – n. the state of being the person who caused something to happen

reverend – n. a priest or minister in the Christian church