US Officials Meet About Plans to Fight Islamic State

Update Required To play the media you will need to either update your browser to a recent version or update your Flash plugin.
By VOA
11 March, 2015

Mr. Obama wants congressional approval of a U.S. force that would last three years. He also wants Congress to agree on limits on the use of ground troops.

The Senate Foreign Relations Committee questioned Defense Secretary Ashton Carter, Secretary of State John Kerry and General Martin Dempsey. The general is the Chairman of the Joint Chiefs of Staff. 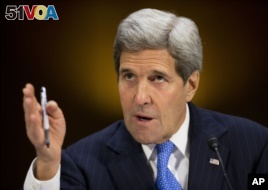 Republican Party lawmakers have objected to the president's plan to limit the use of U.S. ground forces. Some members of Mr. Obama's Democratic Party oppose the use of any forces on the ground.

The United States is leading an international coalition against the Islamic State. The militant group seized large areas in both Iraq and Syria last year. The U.S. military has been carrying out airstrikes against Islamic State targets in Iraq since August and in Syria since September.

Iraqi forces have reportedly entered Tikrit. The move follows a 10-day offensive on the city against Islamic State militants.

The coalition of Iraqi military and Shi'ite militias gained ground Wednesday in an area north of the city.

In his words, "We know the links are there" between the two groups. He also predicted that a military offensive will oust Boko Haram from the area it controls in northeastern Nigeria within three weeks.

Another Nigerian official said a total of 36 towns have been recovered from the militant group since last Friday. He praised Chad, Cameroon and Niger for cutting off supplies to Boko Haram's fighters.

Nemtsov murder suspect may have confessed under torture

A Russian official says there are reasons to believe a suspect in the murder of opposition leader Boris Nemtsov admitted to the crime after being tortured.

Andrei Babushkin is a member of the Russian government's human rights council. Mr. Babushkin told reporters that he visited the main suspect, Zaur Dadayav, in prison on Tuesday. The official said he had seen "numerous wounds" on his body.

A Moscow newspaper reported Wednesday that Zaur Dadayev has changed his statement to Russian officials. It reported him as saying he admitted to killing Boris Nemtsov because officials promised to release someone else who was also detained.

committee – n. a group of people given special work

ground – adj. having to do with land, soil or the earth's surface