Update Required To play the media you will need to either update your browser to a recent version or update your Flash plugin.
By VOA
26 March, 2015


France says it appears a Germanwings pilot purposely caused the deadly crash of the passenger plane in the French Alps Tuesday.

The 28-year-old German co-pilot, Andreas Lubitz, was alone at the controls when he flew the plane into the ground. The crash killed all 150 people on board.

The French prosecutor told reporters that Captain Lubitz apparently wanted to destroy the airplane. He said investigators came to this understanding after listening to the last 30 minutes of sound on the flight's voice recorder. 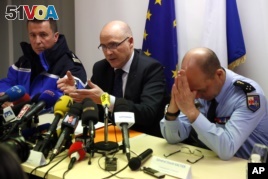 The pilot and co-pilot spoke of usual things for 20 minutes. Then pilot left the cockpit. He was locked out of the room when he returned. The co-pilot can be heard breathing during this time. He did not speak to the pilot or air traffic controllers again, however. The recording suggests the pilot tried to break down the door into the cockpit.

Investigators do not know why the co-pilot would have wanted to crash the plane.

The airstrikes targeted areas around the main airport in the capital, Sana'a, and damaged homes in the area. Arab media reported airstrikes on Yemeni airbases in other cities, as well.

Iran has expressed anger over the Saudi-led airstrikes.

Police in Uganda say they have received "credible information" that the Somali militant group al-Shabab is planning an attack in the capital, Kampala.

The warning Thursday follows a similar message a day earlier from the U.S. embassy in Kampala.

The police statement says al-Shabab may target public places such as hotels, malls, markets and parks. It urges people to watch out for suspicious activity or objects.

credible – adj. able to be believed: reasonable to trust or believe