Update Required To play the media you will need to either update your browser to a recent version or update your Flash plugin.
By Mario Ritter
27 March, 2015

Yemen Foreign Minister Riyadh Yasin said the Houthi rebels should weaken after two days of airstrikes from a coalition of Arab countries, led by Saudi Arabia.

The coalition of 10 countries, including five Gulf kingdoms, is trying to bring Yemen's internationally recognized government back to power. Military officials said the coalition airstrikes targeted the northern province of Saada, home of the Houthi rebels. Other targets included military bases in and around the Yemen capital of Sana'a held by rebel forces. After the start of a Saudi-led airstrike campaign, Shiite rebels known as Houthis protest in Sana'a, March 26, 2015.

Saudi officials agreed that the first phase of the bombing campaign was successful. However, a Saudi defense ministry adviser, Ahmad Bin Hassan Asiri, said a ground offensive might also be necessary. 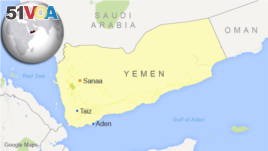 Yemen has increasingly sunk into violence and disorder since a popular uprising removed President Ali Abdullah Saleh from power in 2012. The Houthis are now allied with Mr. Saleh and have advanced throughout the country.

Last September, the Houthi rebels had agreed to share power with President Abd-Rabbu Mansour Hadi after they seized the capital, Sana'a. The latest round of fighting started when the Houthis chased after Hadi who had fled to the southern city of Adan.

The United States, Britain, France and Japan closed their embassies in Yemen last month because of security concerns. A statement by the U.S. State Department released last week said the U.S. government is temporarily moving its workers from Yemen in coordination with the government there.

The Houthis are Shi'ite Muslims and are supported by Iran. A majority of Yemenis, however, are Sunni Muslims. The situation has become another point of sectarian conflict between Shi'ite and Sunni Muslims who have opposed each other in several Mideast countries including Iraq.

Iran denies its role in supporting the Houthis. It also denounced the Saudi-led offensive in Yemen. Iranian Foreign Minister Mohammad Javad Zarif said on Friday the airstrikes should stop. He said the actions would only cost lives. Mr. Zarif called for dialogue and national reconciliation in Yemen. The conflict in Yemen happens as Iran is negotiating with the U.S. on its nuclear program.

Meanwhile, Yemeni President Abd-Rabbu Mansour Hadi has fled the city of Adan and is now in the Saudi capital Riyadh. Mr. Hadi is expected to attend a meeting of Arab leaders in the Egyptian town of Sharm el-Sheikh during the weekend.

And that is In the News from VOA Learning English.

This story is based on reports from Mike Richman in Washington and Ed Yeranian in Cairo. Mario Ritter wrote it for VOA Learning English. Hai Do was the editor.

phase - n. a part or step in a process : one part in a series of related events or actions

sectarian - adj. relating to religious or political sects and the differences between them

reconciliation - n. the act of causing two people or groups to become friendly again after an argument or disagreement

dialogue - n. a discussion or series of discussions that two groups or countries have in order to end a disagreement