Update Required To play the media you will need to either update your browser to a recent version or update your Flash plugin.
By VOA
07 May, 2015


A U.S. appeals court in New York ruled Thursday that the National Security Agency's program to collect phone records of Americans is illegal.

The program collected "metadata" from millions of phone calls from American citizens. The metadata recorded the times when the phone calls were made and the phone numbers called.

The surveillance program was not known to the public until two years ago. NSA contractor Edward Snowden leaked the information about the program to reporters in June of 2013. 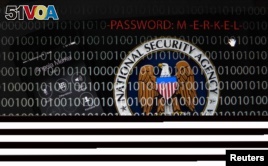 FILE - A mobile phone simulating a call ; a tablet computer showing the logo of the United Staes' National Security Agency (NSA) is seen in this multiple exposure picture.

The NSA claimed that the spying program was legal under the Patriot Act, which Congress passed following the September 11 terrorist attacks.

The appeals court ruled that the spying program was not authorized by Congress. The three-judge panel of the court wrote,"Congress cannot reasonably be said to have ratified a progam of which many members of Congress - and all members of the public - were not aware."

British voters are voting in a close election that could oust Prime Minister David Cameron from office.

Public opinion studies show that 33 percent of British voters support Mr. Cameron's Conservative Party. The Labor party, led by Ed Milliband, is only one point behind.

Observers are calling the election Britain's most unpredictable and consequential in a generation.

Mr. Cameron has promised to hold a referendum if he is re-elected. The referendum will ask if Britain should remain in the 28-nation European Union.

On April 28, Iranian forces seized the ship in the Strait of Hormuz. The seizure followed a legal complaint from a private Iranian company.

The incident took place while Iran and the U.S. are negotiating Iran's nuclear program and international economic restrictions. At the same time, the U.S. is supporting Saudi Arabia in its air campaign against Iranian-backed rebels in Yemen.

After the Maersk seizure, the U.S. announced that its Navy will escort all U.S.-registered vessels through the Strait of Hormuz.

The strait is the path for one-fifth of the world's oil transport.

metadata – n. a set of data that describes and gives information about other data.

referendum – n. an event in which the people of a county, state, etc., vote for or against a law that deals with a specific issue; a public vote on a particular issue

complaint – n. an official charge saying that someone has done something wrong

escort – v. to go with (someone or something) to give protection or guidance