U.S. Secretary of State John Kerry said he had "frank" -- or direct -- discussions with Russian President Vladimir Putin Tuesday in the city of Sochi. The two leaders discussed Ukraine, Syria and Iran.

Mr. Kerry has not visited Russia since tensions rose between the two countries over disagreements on Ukraine and Syria.

Mr. Kerry met with Russian Foreign Minister Sergei Lavrov earlier. Mr. Lavrov later said it was "absolutely necessary" to avoid steps that could further harm relations between the two countries. He also said that Tuesday's meeting had helped leaders in Moscow and Washington better understand each other. 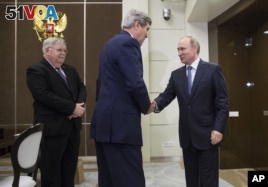 U.S. Secretary of State John Kerry, left, is welcomed by Russian President Vladimir Putin at the presidential residence of Bocharov Ruchey in Sochi, Russia, Tuesday May 12, 2015.

The Philippines and Japan have held their first-ever bilateral naval training. Both countries are in a maritime territory dispute with China.

Philippines officials said the training was not meant to send a message to China but to improve military abilities.

However, a Chinese foreign ministry official said her country remained concerned about the drills. She also accused the Philippines of repeatedly violating international laws and inciting tensions.

A five-day cease-fire began Tuesday between a coalition of Arab countries and Houthi rebels in Yemen. Hours earlier, the new UN envoy to Yemen arrived in the country. Ismail Ould Cheikh Ahmed will seek to move Yemen's warring groups toward peace.

The cease-fire is designed to permit humanitarian aid to reach civilians inside the country. Many are in need following the more than six weeks of ground battles and Saudi-led airstrikes.

Mr. Sharif condemned the Afghan's Taliban's spring offensive. He warned that the Pakistani government will consider continuation of the attacks as "terrorist acts." He promised to take shared action with Afghanistan against militant hideouts along the countries' border.

Mr. Sharif's comments were considered his strongest ever in support of peace in Afghanistan.

frank – adj. used to say that someone is speaking or writing in a very direct and honest way

maritime – adj. of or relating to sailing on the sea or doing business (such as trading) by sea

drone – n. an unmanned aircraft or ship guided by remote control or onboard computers