Update Required To play the media you will need to either update your browser to a recent version or update your Flash plugin.
By VOA
14 May, 2015

Several months ago, Mr. Xi was a guest of Mr. Modi's at the Indian leader's hometown of Ahmedabad.

A Chinese newspaper says Mr. Modi and Mr. Xi are expected to sign $10 billion worth of economic deals during their talks. 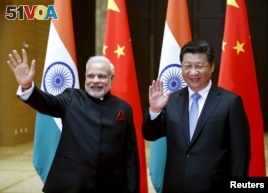 Mr. Modi will travel Friday to Beijing to meet with Chinese Premier Li Keqiang and other top Chinese officials.

Mr. Obama sought to ease concerns over a possible agreement with Iran.

U.S. security official Ben Rhodes said the United States would welcome support from Gulf countries for the nuclear deal. But many Arab leaders are concerned the plan would empower Iran and destabilize the Gulf area.

The Taliban said it carried out a deadly attack on a hotel in Kabul Wednesday night. Most of the 14 people people killed were foreigners. They had been attending a party at the Park Palace hotel when three gunmen entered and began to fire. Police fought with the attackers for five hours before killing them.

Another stranded boat holding hundreds of migrants has been seen off the coast of Thailand. Those on the boat are believed to be victims of human trafficking.

The International Organization for Migration told VOA Thursday that the boat had been found. However, it is not clear whether it is in Thai or Malaysian territory. A Thai official said the boat is off the coast of Malaysia's Langkawi island.

empower – v. to give power to (someone)

destabilize – v. to cause (something, such as a government) to be unable to continue existing or working in the usual or desired way

stranded – adj. left without the means to move from somewhere.