Update Required To play the media you will need to either update your browser to a recent version or update your Flash plugin.
By VOA
20 May, 2015


The North Korean government has canceled a planned United Nations visit to the Kaesong Industrial Complex. The cancellation came just a day before UN Secretary-General Ban Ki-moon was to visit the industrial center.

The complex lies just north of the South Korean border. It is one of the few remaining examples of South Korea's Sunshine Policy of engagement with North Korea. Under the program, the South has provided aid and support programs to its northern neighbor.

Mr. Ban said he was surprised by the sudden cancellation. 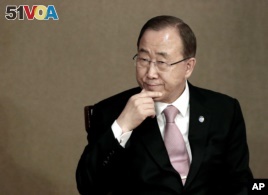 "Early this morning, the authorities of the Democratic People's Republic of Korea informed us, through their diplomatic channel, that they were reversing their decision for me to visit the Kaesong Industrial Complex. No explanation was given for this last-minute change."

The UN official had said he wanted to help ease relations and improve security on the Korean peninsula. He said his visit to Kaesong would show the benefits of cooperation between the two countries.

More than 53,000 North Koreans work at 120 South Korean factories in the complex.

He says his government once again urges North Korea not to move towards isolation, but toward peace on the Korean peninsula.

Chinese nuclear experts recently warned that North Korea has 20 nuclear warheads. North Korea has held underwater missile tests. The technology could soon give it the ability to strike anywhere in the world.

Observers say North Korea's sudden cancellation does not come as a complete surprise. They say the government has ignored UN restrictions to its nuclear program and against a UN resolution. The measure asks the International Criminal Court to investigate North Korean leader Kim Jong Un and other officials for crimes against humanity.

"So what it is doing is playing a game of shoot the messenger with the U.N., trying to punish or shut out the U.N. whenever it can. And this latest action to bar Ban Ki-moon from the Kaesong industrial complex is yet another example of that."

U.S. Secretary of State John Kerry spoke about the North Korean government during his recent visit to Seoul. He said the North has rejected Chinese and Russian efforts to restart international talks about its nuclear program in exchange for economic assistance.

VOA's Brian Padden reported on this story from Seoul. Ashley Thompson adapted it for Learning English. George Grow was the editor.

peninsula – n. a piece of land that is almost entirely surrounded by water and is attached to a larger land area

isolation – n. being in a place or situation that is separate from others; the condition of being isolated

warhead – n. the part of a missile that contains explosives; weapon

accountable – adj. responsible; required to explain actions or decisions to someone

internal – adj. coming from inside

reconciliation – n. the act of causing two people or groups to become friendly again after a disagreement