Update Required To play the media you will need to either update your browser to a recent version or update your Flash plugin.
By VOA
26 May, 2015


The Iraqi government said it has launched an operation to seize control of Anbar province from Islamic State militants.

A government television broadcast announced the move. Islamist fighters seized the western province's capital, Ramadi, earlier this month. Iraqi troops and pro-government militias have been gathering east of the city, preparing for an offensive to reclaim the mostly Sunni province. 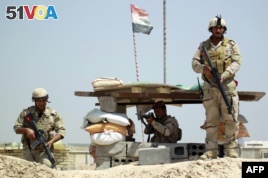 Iraqi government troops at a checkpoint in the Jurf al-Sakher area, some 50 kilometers south of Baghdad, to protect the area from further Islamic State (IS) group advancement, on May 24, 2015. (AFP PHOTO / HAIDAR HAMDANI)

The spy trial of American newspaper reporter Jason Rezaian began Tuesday in Iran. The first day of the trial was closed to the public and lasted about two hours.

The state-run IRNA news agency said the trial was being held in a Revolutionary Court, which usually hears cases involving national security.

Iranian officials have not released details of any charges against Mr. Rezaian. The trial is expected to last two to three days.

Mr. Rezaian was arrested last July. He was held for months in an Iranian prison without being charged or permitted to visit with a lawyer.

Recovery continue in Texas and Mexico after strong storms

Recovery operations in Texas and Mexico are expected to continue Tuesday, after severe weather ravaged the region.

The city of Houston got as much as 25 centimeters of rainfall in some areas Monday and Tuesday.

At least six people have died in the storms in Texas and Oklahoma.

Across the border in Mexico, people are cleaning up in Ciudad Acuna after a tornado hit the city, killing at least 13 people.

ravage – v. to damage or harm (something) very badly

tornado – n. a violent and destructive storm in which powerful winds move around a central point