Update Required To play the media you will need to either update your browser to a recent version or update your Flash plugin.
By VOA
28 May, 2015


FIFA President Sepp Blatter said corruption scandals within the world soccer organization have brought "shame and humiliation" on the sport.

Mr. Blatter spoke Thursday at the opening of the FIFA Congress in Zurich, Switzerland. He was speaking publicly for the first time since U.S. and Swiss officials announced major corruption investigations of the organization. 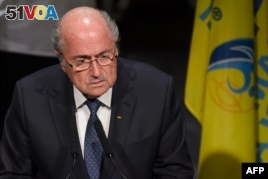 FIFA President Sepp Blatter delivers his speech during the opening ceremony of the 65th FIFA Congress in Zurich, Switzerland, May 28, 2015.

Major FIFA sponsors like Visa and Coca-Cola are calling for FIFA to make major changes within the organization. The United Nations is also reviewing its partnerships with FIFA following allegations of widespread corruption, a U.N. spokesman said Thursday.

Iranian Foreign Minister Mohammad Javad Zarif said Thursday he is hopeful Iran and a group of world powers can reach a final agreement on his country's nuclear program "within a reasonable period of time."

But during a visit to Greece, Zarif also said an agreement will not happen if there are "excessive demands."

Iran and the group that includes Britain, China, France, Russia, the United States and Germany have given themselves until June 30 to form a final deal curbing Iran's nuclear activity in exchange for sanctions relief. The two sides agreed to a framework in April, but still need to work out details such as how quickly to lift the sanctions that have hurt Iran's economy.

Just a week after entering the Twitter world with his new handle, @POTUS, U.S. President Barack Obama was on Twitter Thursday answering questions on climate change.

The president was in Miami, Florida, on Thursday, touring the National Hurricane Center. Mr. Obama spoke about the link between deadly storms and climate change.

During his Twitter question-and-answer session Thursday, the president was asked by one user why he called climate change a national security issue during his State of the Union address in January.

humiliation – n. the act of making (someone) feel very ashamed or foolish

sponsor – n. an organization that pays the cost of an activity or event (such as a radio or television program, sports event, concert, etc.) in return for the right to advertise during the activity or event