In the US Senate, Heated Debate over Catfish

Update Required To play the media you will need to either update your browser to a recent version or update your Flash plugin.
By Mario Ritter
21 May, 2015

The United States Senate moved closer this week to a final vote on Trade Promotion Authority. The Senate agreed on Thursday to end debate on the TPA bill. The vote was 62 to 38.

The procedural move all but guarantees final Senate passage of the measure. If approved, the TPA would simplify the way Congress votes on future trade agreements. It also could influence legislative action on the 12-nation Trans-Pacific Partnership, or TPP. 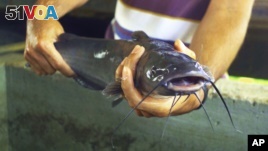 Catfish farming is a moderate-sized industry, but it has been at the center of a dispute in the U.S. Senate.

However, a sharp disagreement over an unexpected trade product, fresh water catfish, has hurt the negotiations. The farm-raised fish is a local U.S. industry valued at less than $1 billion in yearly production.

The Senate dispute arose when Republican lawmaker John McCain criticized a measure calling for increased U.S. government inspections of Asian catfish. He said some nations involved in TPP negotiations are suspicious of the measure.

"The true purpose of the catfish program is to create a trade barrier to protect a small, handful of catfish farmers in two or three southern states – one of the most brazen and reckless protectionist programs that I have encountered in my time in the U.S. Senate."

The 2008 U.S. farm bill ordered that the Department of Agriculture establish and administer a new catfish inspection plan. The Food and Drug Administration tests all other seafood sold in America.

Senator McCain says the program is hurting America's longer economic interests because it appears to be protectionism.

"Ten Asian-Pacific nations have sent letters to the office of the U.S. Trade Representative warning that this USDA catfish office is hurting TPP negotiations. At least one nation, Vietnam, has threatened trade retaliation."

Senator Roger Wicker represents the state of Mississippi, one of America's biggest catfish producers. He says the real issue is not protectionism but the health of American consumers.

"What this is about is food safety for Americans in 50 states who deserve to know that the fish they are eating is unadulterated."

Senator Wicker says Asian-produced seafood has been found to have higher levels of chemicals and other harmful substances. He says production overseas is not operated under the same conditions as in the U.S.

The forceful debate is just one of the barriers to completing the 12 nation free trade agreement. Each country has its own interests to protect.

Claude Barfield says the TPP is larger than any other American free trade agreement. Mr. Barfield is a trade expert at the American Enterprise Institute. He notes that the 12 TPP nations are responsible for about one third of world trade.

Mr. Barfield says the United States will win in some areas of trade negotiations and will have to compromise in others. However, he believes the final TPP deal with be good for the U.S.

Michael Bowman in Washington reported this story. Mario Ritter wrote it for VOA Learning English. George Grow and Caty Weaver were the editors.

protectionism – n. the use of regulations, taxes or other measures to make imported products more difficult to buy

retaliate – v. to do something bad to someone who has hurt you or treated you badly

brazen – adj. acting or done in a very open and shocking way without shame or embarrassment

reckless – adj. not showing proper concern about the possible bad results of your actions