Update Required To play the media you will need to either update your browser to a recent version or update your Flash plugin.
By Faith Pirlo
24 May 2022


As the war in Ukraine continues, there is increasing evidence that Russia has knowingly attacked schools.

Attacks on civilian structures are considered a possible war crime. The Ukrainian government says Russia has shelled over 1,000 schools and has destroyed 95. The Associated Press said the large amount of wreckage and damage is evidence that Russia knew that it was targeting schools.

Recent attacks include a school in the eastern village of Bilohorivka where a bomb destroyed the school. On March 3, School No. 21 in Chernihiv was bombed. 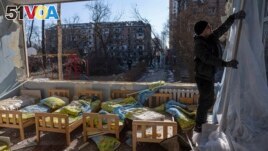 Schoolteacher, Inna Levchenko had reopened School No. 21 to shelter scared families. She has taught there for 30 years. School officials painted the word "children" in large letters on the windows. Russia bombed the school anyway.

Levchenko was buried under wreckage and her legs were broken. She could not see because of blood and dust, but she could hear screams. Just before the attack, she had ordered 70 children to shelter in the basement of the school. They would survive. But nine other people, including a 13-year-old boy who was her student would not.

Levchenko said, "Why schools? I cannot comprehend their motivation. It is painful to realize how many friends of mine died ... and how many children, who remained alone without parents, got traumatized. They will remember it all their life and will pass their stories to the next generation."

The Associated Press and the PBS series Frontline have been investigating the incidents. The two reported that they have independently confirmed that Russia has destroyed 57 schools. They say the attacks were carried out in a way that suggests possible war crimes. These schools represent a few of the many possible war crimes.

A school director from the town of Gorlovka, Sergey But, said, "It's a tragedy for us ... It's a tragedy for the children." His school, was a place where children flew kites and took photos of their friends. Now, he said it is in ruins with broken glass and wreckage. Two teachers, Elena Kudrik, the geography teacher, and Elena Ivanova, the assistant director of the school were killed.

In towns like Ohktyrka, cluster bombs, shelling, and gunfire have destroyed several kindergartens. Young children, teachers, and parents have been killed. Valeria Grusha has taught in Kyiv province for 35 years. She said that just as school administrators had started to prepare for the war, Russian troops invaded. They stopped teaching and called Ukrainian leaders.

Grusha said, "When I start talking to the directors of destroyed and robbed institutions, they are very worried, crying, telling with pain and regret."

War crime experts say it will be difficult to prove the intent of the attacks even with the destruction and killing of civilians.

David Bosco is a professor and researcher of international relations and war crimes at Indiana University. He said that prosecuting war crimes can be difficult. If the military uses civilian buildings, then those buildings can be wartime targets. The chief idea is to find a pattern of Russia targeting civilian buildings like schools as a military approach.

"The more you can show a pattern, then the stronger the case becomes that this was really a policy of not discriminating between military and civilian facilities," Bosco said.

Surviving such conflicts like war and having schools destroyed hurts teachers and students for generations to come.

Bosco said schools are supposed to be a safe place. He said destroying that is "in essence, attacking the next generation."

Abdulkafi Alhamdo is a Syrian teacher from Aleppo, Syria. Jasminko Halilovic is a 34-year-old from Sarajevo, in present-day Bosnia-Herzegovina. Both men have seen school destroyed by war and suffering. Alhamdo saw these things during the Syrian civil war in 2014, and Halilovic saw it during the Bosnian War in early 1990s.

Alhamdo remembers the children's paintings dripping with blood after a bomb exploded during an artwork presentation. He said that creating fear, hopelessness and anger in the children is the goal of the enemy.

Alhamdo said, "When they see their school destroyed, do you know how many dreams have been destroyed?"

Halilovic was a young child during the Bosnian War. He also went to school in underground rooms. He has founded the War Childhood Museum. It records children's stories and saves objects from wartime. He has worked with displaced Ukrainian children since the start of the invasion of the Donbas area in Ukraine in 2014. He recently had to remove himself and his workers because of the current conflict.

Halilovic said, "Once the fighting ends, the new fight will start. To rebuild cities. To rebuild schools and infrastructure, and to rebuild society, and to heal. And to heal is the most difficult," he said.

More than half of Ukrainian children have been displaced. Schools have become shelters, and the war has forced learning underground. Millions of children are continuing their studies on the internet. International aid organizations like Save the Children and UNICEF have been working with the government to set up internet learning programs.

Save the Children said in a statement, "Educating every child is essential to preventing grave violations of their rights."

comprehend – v. to understand the meaning of

traumatize — v. to cause to become very upset in a way that often leads to serious emotional problems

resilience – n. ability to bounce back and be strong

prosecutor – n. one who is in charge of the process of pursuing formal charges against an offender to final judgment

nurturing – n. feeding and caring for a child or someone else who needs it

kite – n. an object that has a light frame and cloth that can be used for flying in the air with the wind

intent –n. what someone means to do

pattern – n. a reliable sample of traits, acts, tendencies, or other observable characteristics

approach -- n. a particular manner of taking such steps

facilities – n. a place, especially in buildings, where a particular activity happens

essence – n. the basic nature of a thing the quality or qualities that make a thing what it is