In US, Fear of Ebola Spreads Faster than Virus

Update Required To play the media you will need to either update your browser to a recent version or update your Flash plugin.
By VOA
24 October, 2014


For Americans, Ebola started out as a disease in a far-away continent. But then a Liberian man, Thomas Eric Duncan, died from Ebola at a hospital in Dallas, Texas. And two nurses caring for him became infected with the virus. This showed Americans that Ebola had come to the United States.

One of the nurses was moved from Dallas to the National Institutes of Health in Bethesda, Maryland. Anthony Fauci is a top official with the NIH.

"We fully intend to have this patient walk out of this hospital. And we'll do everything we possibly can to make that happen." 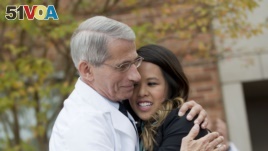 A group called National Nurses United represents U.S. healthcare workers. The labor union has called for better training and equipment for workers who may treat Ebola patients. Melinda Markowitz is the union's vice president. She says her group has been asking for better preparation since the Ebola outbreak began in West Africa in March. 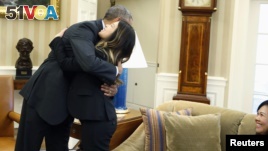 Top American doctors have repeatedly said that most people have little chance of being infected. Experts have stated that Ebola can only be spread through contact with an infected person's body fluids -- like blood. But it appears many Americans are questioning what they have heard.

A recent survey found more than 80 percent of Americans believe that Ebola can be spread in many ways, including air expelled through the nose or mouth. The Harvard School of Public Health released the findings. The study also showed that most adults fear there will be a sudden spread -- or outbreak -- of Ebola in the United States in the next 12 months.

Another survey found that more than 70 percent of Americans would support calls to ban travel to and from Ebola-affected parts of Africa. The questioning was completed shortly after the death of Mr. Duncan. This survey was a project of the Reuters news service and the market research company Ipsos. 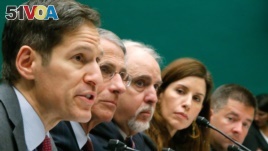 Thomas Frieden heads the U.S. Centers for Disease Control and Prevention. He spoke at a congressional hearing last week. When asked whether federal officials had considered a travel ban, Mr. Frieden had this to say:

Last week, President Barack Obama named Ron Klain to lead U.S. efforts in fighting the Ebola crisis. In his weekly radio broadcast, the president urged Americans not to give in to what he called "hysteria or fear."

Many Republican Party activists -- and even some Democrats -- have urged the Obama administration to bar non-US citizens from parts of West Africa. This week, the administration announced that all travelers arriving in the United States from some African nations are required to pass through one of five airports. All five will provide expanded testing for Ebola.

Late this week, U.S. officials reported another case of the disease. They said that tests show a New York City doctor has the virus. The doctor recently treated Ebola patients in Guinea.

infected – v. made sick with something that causes disease

patient – n. a person being treated by a doctor for a health problem

contact – n. the act of touching or being close to a person or thing

fluids – n. substances that can flow, such as a liquid

porous – adj. easy to pass or get through

hysteria – n. a state in which your emotions are so strong that you behave in an uncontrolled way