In Year of the Dog, Malaysia Avoids Dog Symbols

Update Required To play the media you will need to either update your browser to a recent version or update your Flash plugin.
By Alice Bryant
28 January, 2018


The Lunar New Year, also known as the Chinese New Year, begins on February 16. Twenty eighteen is the Year of the Dog. But in Malaysia, some businesses are avoiding dog symbols in their decorations. They do not want to insult the country's Muslim majority.

Islamic tradition considers dogs "unclean." Muslims are required to wash themselves if they touch the animal.

Malaysia is a nation of several religions and cultures. But, there has been a growing rejection of activities considered insulting to Islam.

In recent years, this has become evident in demonstrations against music shows and celebrations that involve alcohol.

Pavilion Kuala Lumpur is a shopping center in the Bukit Bintang area of the capital. It is popular with foreign visitors. This year, the center has not included dog imagery in lunar new year decorations. Instead, the decorations honor the center's tenth anniversary.

Kung Suan Ai is the director of marketing for Pavilion Kuala Lumpur. She said religious and cultural sensitivities influenced the decoration choices. The shopping center attracts three million people of many cultures each month, she said. 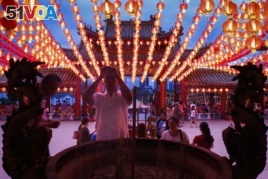 Twelve animals make up the traditional Chinese zodiac. It includes dogs and pigs – another animal which Muslims consider unclean.

Malaysian Muslim leaders have spoken out about other events that involve dogs. At the 2014 Commonwealth Games opening ceremony in Glasgow, Scotland, athletes paraded with a Scottish terrier dog. After the event, Malaysian politicians expressed their disapproval, calling the act "disrespectful."

MyTOWN is another Kuala Lumpur shopping center where half the visitors are Muslim. This year, it has made its Lunar New Year decorations more moderate.

Christopher Koh is Head of Marketing for MyTOWN. He said the dogs are not the central object on display. He said they do not appear as objects of worship.

For this same reason, he said, many Malaysian businesses also no longer display a large pig to honor the Year of the Boar.

Alex Chow runs a company that makes packaging materials. He said that his large business clients have chosen very general imagery for their packaging designs this year.

But some Malaysians are not happy about these changes.

Wong Wei-Shen, an ethnic Chinese, has several dogs as pets. She said businesses were being "ridiculous."

"It's a shame because Malaysia is a multicultural country. To dismiss the fact that the Chinese have a dog as one of the zodiac animals is unfair," said Wong.

She said that every zodiac animal has good qualities, and "the dog represents a guide, a best friend, a comforter and loyal friend."

decorations – n. something added to an object or place to make it look more attractive

zodiac – n. an imaginary area in the sky that the sun, moon, and planets appear to travel through

packaging – n. material used to enclose or contain something

pet – n. an animal that people keep mainly for pleasure

comforter – n. someone who helps you to feel less worried, upset or frightened