Update Required To play the media you will need to either update your browser to a recent version or update your Flash plugin.
By Brianna Blake
2010-4-23 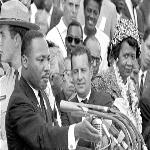 Photo: AP
Dorothy Height, right, during Martin Luther King's "I Have a Dream" speech in Washington on August 28, 1963

Dorothy Height died Tuesday at the age of ninety-eight. She witnessed more civil rights history than any other African-American leader of her time. She said the greatest change she witnessed was the ending of racial segregation laws in the United States.

She was the longtime chairwoman of the National Council of Negro Women. She was an activist, humanitarian and adviser to presidents including Barack Obama. He remembered her as "the godmother of the Civil Rights Movement."

Dorothy Height grew up in Pennsylvania. She won a four-year college scholarship, the top prize nationally in a public speaking contest on the Constitution.

She arrived at school in New York City -- only to learn that an unwritten limit of "two Negro students per year" had already been met.

DOROTHY HEIGHT: "I was accepted at Barnard College and I was denied admission when I arrived because they had a quota of two. And they did not know that I was not white. And so when I got there I was turned away."

Dorothy Height went on to earn bachelor and master's degrees in four years at New York University. She worked with Martin Luther King Junior in the push for civil rights for blacks in the nineteen fifties and sixties.

Yet she had to push to make herself heard as a woman among mostly male civil rights leaders. She was the only woman standing nearby as Martin Luther King gave his "I Have a Dream" speech in Washington.

Dorothy Height received the Presidential Medal of Freedom and the Congressional Gold Medal for her work for racial and gender equality.

Benjamin Hooks died last week at the age of eighty-five. He was a clergyman, lawyer and former head of the NAACP -- the National Association for the Advancement of Colored People. He received the Presidential Medal of Freedom in two thousand seven. 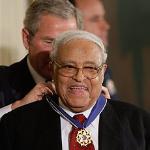 Benjamin Hooks was born in Memphis, Tennessee, at a time when the southern city discriminated against blacks in all areas of public life.

He enrolled in college but was drafted into the Army and served in Italy during World War Two. During training, he and other blacks were kept apart from the whites they trained with.

BENJAMIN HOOKS: "So when I came out of the Army, I had already decided I wanted to be part of breaking down segregation. Because I felt it had to be broken down. I felt it would be broken. So I consciously devoted my life to that."

But because of his color no law school in Tennessee would admit him. So Benjamin Hooks enrolled at DePaul University in Chicago, Illinois, where he earned a law degree in nineteen forty-eight.

Soon after that, he returned to Memphis to work with the NAACP. During the nineteen fifties, he helped organize non-violent sit-in protests and boycotts of segregated white businesses.

He and Martin Luther King both wanted to create social change through a combination of moral persuasion and legislation. Martin Luther King spoke about changing white people's hearts and changing the laws. But Benjamin Hooks placed more importance on legal activism. He served as the director of the NAACP for fifteen years.

And that's IN THE NEWS in VOA Special English, written by Brianna Blake. You can read and listen to our programs at 51voa.com. I'm Steve Ember.