Update Required To play the media you will need to either update your browser to a recent version or update your Flash plugin.
By VOA
2010-4-30 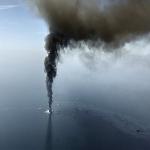 Photo: AP
A photo from last week showing the wreckage of the Deepwater Horizon oil rig. Oil continues to spill into the Gulf of Mexico.

Five years ago this August, Hurricane Katrina struck. Now, American states along the Gulf of Mexico are fearing a different kind of environmental disaster. Oil is flowing from a damaged well one thousand five hundred meters under the sea.

JANET NAPOLITANO: "This is a spill of national significance."

That was Homeland Security Secretary Janet Napolitano, announcing a higher level of government action. President Obama on Thursday ordered federal officials to intensify efforts to deal with the huge spill.

The president said again Friday that BP is "ultimately responsible" under the law for paying the costs of response and cleanup operations.

BARACK OBAMA: "But we are fully prepared to meet our responsibilities to any and all affected communities."

He said he has ordered a report in thirty days on what, if any, additional safety measures and technologies should be required to prevent future spills.

Oil reached the coastline late Thursday near the mouth of the Mississippi River in the southern state of Louisiana. The oil could also affect parts of Alabama, Florida, Mississippi and Texas.

It threatens birds, fish, shrimp and other wildlife. Seafood is a big industry along the gulf. Eric Drury is a shrimper but knows that his business is not the only one threatened.

ERIC DRURY: "Everybody's in the same boat. It's going to hurt everything: oyster fisherman, everybody."

Workers have been placing long lengths of containment booms around the oil as winds and waves push it toward shore. Cleanup efforts have included controlled burns. And robotic submarines are being used to try to stop the leak -- a process that could take weeks.

What caused the explosion was not known. Also, the damaged well did not stop the flow of oil as it should have.

At the end of March, President Obama called for the United States to expand its offshore oil and gas exploration. He said his plan would balance the need for energy with the need to protect natural resources. Now the White House says there will be no additional drilling while the spill in the Gulf of Mexico is investigated.

Another issue facing the administration this week was immigration. Federal law makes being in United States illegally a civil offense. But a new state law in Arizona will make it a crime. The law was signed last week and goes into effect in a few months. Police could have to take action if they have a "reasonable suspicion" that someone is in the country illegally.

Supporters say the law will help reduce crime by illegal immigrants who cross the border from Mexico into Arizona. Critics say it will support racial discrimination. Some urge economic boycotts of the state.

Different groups are moving to fight the new law in court, and the federal government could join them. President Obama calls the Arizona law "misguided" and said Congress needs to pass immigration reform. But in this election year, that does not seem very likely to happen.

And that's IN THE NEWS in VOA Special English. You can find us on Facebook, Twitter and iTunes at VOA Learning English. I'm Steve Ember.