Inauguration Day Is also Moving Day at the White House

Update Required To play the media you will need to either update your browser to a recent version or update your Flash plugin.
By Hai Do
19 January 2021


Moving from one house to another is a difficult process. It is even more difficult for workers at the White House on Inauguration Day.

On Wednesday at 12 p.m., Joe Biden will be sworn in as the 46th president of the United States. Workers will then have about five hours to get the house ready for the new president and his family.

"...As soon as the president and president-elect leave, they wave in the moving trucks, and they'll pack up the outgoing president's things, and then they'll unpack all of the new first family's things," Costello said.

But this year is anything but normal.

President Donald Trump has said that he will not attend Biden's inauguration. That means the two will not be going to the Capitol together.

However, by 12:01 p.m., all of Trump's belongings will have to follow him out of the White House to his private home in Florida. And trucks loaded with Biden's belongings can enter the grounds. 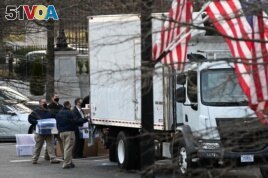 Workers move boxes from the Eisenhower Executive Office Building into a truck on the White House grounds in Washington, U.S., January 14, 2021. (REUTERS/Erin Scott)

The White House normally is deep cleaned in between families, said Anita McBride. She was an assistant to President George W. Bush and helped him move out of the White House in 2009.

"Everything goes through a massive cleaning," she said. Bedding is removed and new mattresses are put in place. Floor rugs are cleaned or replaced. The walls get fresh paint, as needed.

The coronavirus pandemic has made such efforts even more complex. In addition to usual cleaning, the White House will go through a special COVID-19 cleaning. CNN reports that the full cleaning process will cost almost $500,000.

There have been several coronavirus outbreaks in the White House in recent months. Those infected included Trump, his wife, Melania, and many of the president's close aides.

Biden is tested often for the coronavirus and recently received his second shot of the vaccine. But his age still puts him at risk of sickness. The incoming president is 78 years old.

Some public health experts have said it is important to take extra care to reduce the spread of the virus during the move.

Linsey Marr is a Virginia Tech professor with expertise in airborne transmission of viruses. "There's going to be a lot of people in there moving things in and out," she said. "I'd want to make sure that those people are masked, covering their nose and mouths at all times."

Marr added that the Biden family should wait a few hours after the move is finished before they enter the White House.

Make them feel at home

Once the moving trucks pass through security and get onto White House grounds, housekeeping workers will start carrying the Biden family's belongings inside.

The new first family is able to choose furniture and works of art from the White House's extensive collection, which is kept in Maryland.

When the Bidens do get to the White House later on Inauguration Day, McBride said they will find "all their clothes are hanging in the closet...all of their personal photos are out in the places where they wanted them to be."

They will also find their favorite food and drinks in the kitchen. The Washington Post reported that those products included peanut butter, apples, red grapes, Diet Coke and Coke Zero, low-fat yogurt and ice cream.

Angella Reid is a former White House chief usher. She oversaw moving day in 2017 for the Trumps. She said the goal of moving day is to say goodbye to the outgoing president and the first family and then immediately create a "warm, welcoming living space" for the new president and first family.

Hai Do adapted this story for Learning English with additional reporting from the Associated Press. Ashley Thompson was the editor.

pack - v. to put (something) into a bag, suitcase, etc., so that you can take it with you

transmission - n. the process in which something is spread

mattress - n. a cloth case that is filled with material and used as a bed

closet - n. a usually small room that is used for storing things (such as clothing, towels, or dishes)

kitchen - n. a room in which food is cooked