Update Required To play the media you will need to either update your browser to a recent version or update your Flash plugin.
By Dan Novak
19 October 2021


Researchers have found that about 321,000 undocumented and asylum-seeking children from Central America went to American schools from 2017 to 2019. The research was by the Rand Corporation, a nonprofit group based in California.

During that same time period, the United States saw a large increase in undocumented immigrants entering the country through the southern border, mostly from Mexico, El Salvador, Guatemala and Honduras, the study says. The report estimates that 491,000 of the immigrants who remained in the United States were children, meaning just 65 percent enrolled in school.

When inside the country, U.S. federal law guarantees children an education without considering their immigration status.

Cardona said in an interview with Newsweek that "when there are students that are here that need to be educated, we have an obligation. Whether or not that means they have different rights, I'll leave that to others. But when it comes to education, every student should get an education when they're here."

Many states offer different levels of support to immigrants, both documented and undocumented, as well as to refugees. That can affect the quality of their education argue the Rand researchers.

Some states give students more financial aid while some limit enrollment based on age. Some states give undocumented students access to lower in-state tuition to public universities, but others do not.

Undocumented, asylum-seeking and refugee students face great difficulties while seeking an education. They can face trauma, language barriers, culture shock and a lack of basic needs like food and shelter. Some have never had a formal education.

The Rand research focused on two districts that serve a large population of undocumented and asylum-seeking students: Jefferson Parish Schools in Louisiana and Oakland Unified School District in California. Both districts faced teacher and worker shortages. But the study noted several ways the districts were able to meet the challenges faced by that population of students. 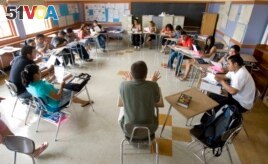 Many districts were not ready for the increase in undocumented students, the researchers say. Rand estimates that 2,000 more teachers and workers were needed in the seven states with the largest number of new students to keep classes the same size. The study also points to a need for more teacher training, mental health services and funding to districts with growing numbers of immigrants.

The pandemic slowed all immigration to the United States in 2020, the study noted. But the U.S. has experienced "an unprecedented number of migrants" at the southern border this year, Homeland Security Secretary Alejandro Mayorkas told reporters in August. In addition, President Joe Biden has also asked Congress for funding to resettle 95,000 Afghans by September 2022.

Leslie Villegas is an education researcher with The New America Foundation. She said that fewer than half of U.S. states track students with limited formal education, who are often undocumented immigrants and refugees. Without that information, Villegas said, it can be hard to know what sort of resources districts need to support those students.

undocumented — adj. not having the official documents that are needed to enter, live in, or work in a country legally

enroll — v. to enter (someone) as a member of or participant in something — usually + in

obligation — n. something that you must do because of a law, rule, promise, etc.

interact — v. to act together : to come together and have an effect on each other